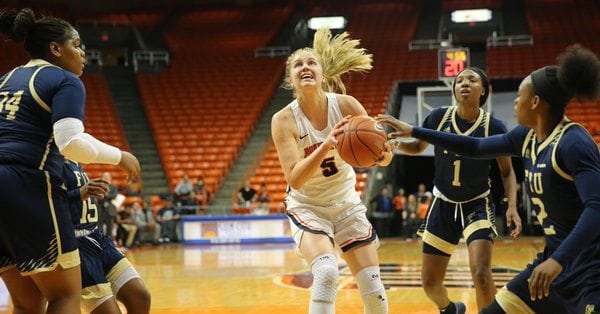 UTEP piled up a season-high 44 points in the paint in addition to going 19-23 at the charity stripe. The 86 points are a Miner C-USA season-high total. Moreover it marked the first time this year that UTEP scored at least 17 points (24/17/22/23) in every quarter.

“We played well pretty much the whole game because every time they would make a run at us we would respond,” UTEP head coach Kevin Baker said. “It feels really to get payoff for them; we’ve been working really hard. It’s nice to see them get back on their feet with a win.”

It was back-and-forth over the first two minutes with the Miners leading 5-3. UTEP then found another gear, unleashing a 17-2 run to storm ahead by 17 (22-5) with 2:46 left in the frame. FIU managed to cut it to 13 (24-11) after 10 minutes of action. The 24 points marked the highest scoring first quarter in Conference USA play for the Miners, with Seda (nine points) and Puc (six points) combining for the bulk of the production.

UTEP ripped off eight consecutive points to open the second quarter on the way to securing a 21-point cushion (32-11) with 7:18 left in the stanza. FIU countered with a 10-0 run of its own over the next two minutes to reduce the Orange and Blue’s advantage to 11 (32-21). The Miners went back to work, eventually extending their lead back to 16 (39-23) but once again the visitors had a response. This time it came in the form of an 11-2 surge to close the half and reduce UTEP’s advantage to seven (41-34) heading to the locker room.

To its credit FIU showed some fight after the break. The Panthers cut the Miner lead to three (45-42) with 6:34 to play in the third quarter, but then UTEP answered. It came in the form of 10 consecutive points, including a huge triple by Cook for the Miners’ first field goal in nearly four minutes. The margin swelled to as many as 17 in the stanza before UTEP settled for a 15-point differential (63-48) going into the fourth quarter.

The visitors utilized a 22-10 run over the first six minutes of the frame to whittle UTEP’s advantage all the way down to three (73-70). The Miners didn’t flinch, though, closing out the game in style by virtue of a 13-0 surge. UTEP dashed any aspirations of a late comeback by FIU thanks to going 7-8 at the charity stripe in the final 1:37.

The Miners will wrap up the regular season by playing host to WKU on “Senior Day” at 1 p.m. MST Saturday. The contest will be broadcast locally on 600 ESPN El Paso El Paso with Steve Kaplowitz and Traci Miller on the call. Additionally it will be streamed on CUSA.tv (subscription required).