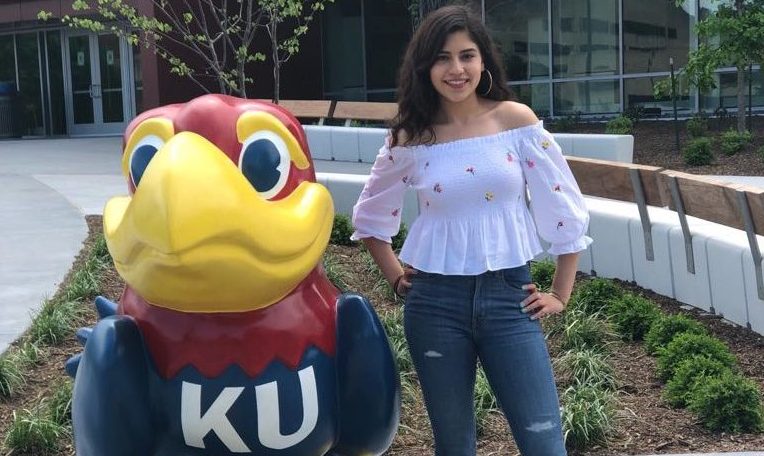 Samantha “Sam” Natera never had use for the old adage, “It’s not what you know; it’s who you know.” The Chihuahua City native grew up in a caring and supportive family believing that people achieved their success independently. Her perspective changed as an undergraduate at The University of Texas at El Paso.

Natera, who earned her bachelor’s degree in finance and general business in 2018, fell into a reserved routine as a freshman: cross the border, attend class, return home, study, and repeat.

Some of her fellow students gently nudged her out of her comfort zone. They encouraged her to learn about student organizations and to get involved on campus. She did, and that led to a student research job with the College of Education, membership in several student groups aligned with her major, a study abroad trip to China, and participation in UTEP’s Law School Preparation Institute (LSPI), where she developed an interest in the legal field.

In the same way, friends suggested she apply for a student assistant position in the Provost’s Office. She got the job but quickly showed the skills to move from the front desk to help with the office’s financial operations. This opportunity proved instrumental in the creation of the support network that led to the latest step in her life’s journey at the University of Kansas School of Law.

“I never planned on a career in law until my junior year when a friend told me about the LSPI,” Natera said. “I learned more about the program, applied and was accepted. I got to do things I never thought possible, like present arguments in front of real judges. It was a great experience that changed my career path.”

David Ruiter, Ph.D., associate provost for student and faculty success, recalled Natera’s positive nature and was impressed with her work ethic and customer service skills. As with all the office’s student employees, he met with Natera regularly to discuss how things were going with work and school. When Ruiter learned that Natera wanted to apply for law school, he volunteered to help with her admissions paperwork.

“When these student workers are here they become our responsibility, and their success is our responsibility,” Ruiter said. “They aren’t just here to do tasks, but they are here because they are on their way somewhere – to graduate school, careers, and leadership roles – and we can contribute to that in a really meaningful way. We want our student employees to know that the work they do in our office is valuable to them moving forward professionally, and so are the relationships and networks they build in this office.”

At some point, Natera’s resolve began to waiver because she was anxious about leaving her family and having to support herself. Later she confessed that her main concern was about having to answer questions from the law school interviewers in English, which is her second language. The self-doubt ate at her to the point where she almost convinced herself that she was not ready for law school.

Ruiter took action after Natera explained her worry to him. It did not take long before several members of the campus community rallied around to help.

“It was interesting because Sam has everything in the world going for her,” Ruiter said. “She is incredibly talented, has great family support, and had already done great things at UTEP. But she was hung up on this one thing, and it was a big enough worry that it was going to be hard for her to move forward. It took me a couple of minutes to make a few calls around campus to colleagues who had the expertise to assist her. With their support, Sam was able to get prepared for her challenge and realize that she truly is ready for this opportunity.”

Ruiter put Natera in contact with Louie Rodriguez, associate vice president for student affairs, and Arturo Barrio, senior advisor to the President on Mexico and Latin America at UTEP. Rodriguez, a former New York City lawyer, gave her an idea of the types of questions she might be asked. Barrio, who recalled how UTEP students, faculty and staff helped him as an undergraduate, reached out to friends in the legal field who could give her useful advice.

One of Barrio’s friends was Monica Perez, shareholder and attorney at Mounce, Green, Myers, Safi, Paxson, & Galatzan, P.C. in El Paso. The UTEP alumna said she remembered feeling the same way as Natera as she prepared her law school applications. She and other UTEP alumni volunteered their time to work with Natera and conducted mock interviews with her to build her confidence and ease some of her fears of the unexpected.

“It is our responsibility as alumni to lend our experiences, time, and/or funds to support the students and programs of the University,” Perez said.

Natera said the help and encouragement she received from the UTEP community gave her the confidence to continue her law school application process – to include the interviews. In the end, she had six offers from law schools around the country.

“The way the UTEP community came together to help me touched my heart,” Natera said. “They all wanted good things for me and just wanted to see me succeed. I don’t think I could have done it without them. I want to thank everyone who helped me, and it is my hope to one day be able to help other students succeed as the UTEP family helped me.”