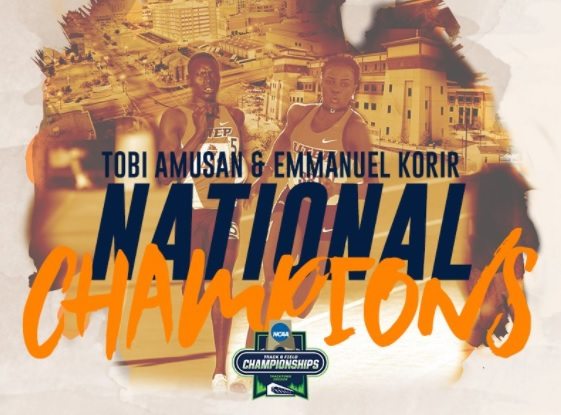 Eugene, Or. – Tobi Amusan finds redemption as she won her first NCAA title in the 100m hurdles at historic Hayward Stadium on the final day of the NCAA Championships, Saturday evening.

“Amusan is another special talent. She executed her race very well and all the hard work she put in this season paid off,” head coach Mika Laaksonen said. “This was her closest race yet and she stepped up to the challenge.”

The freshman exploded out of the blocks and held onto a narrow lead over the defending champion Jasmine Camacho-Quinn (Kentucky). In the closing moment of the race Amusan leaned over the finish line to clock a time of 12.57, while Camacho-Quinn was close behind at 12.58.

The Nigerian native broke the UTEP school record in this event earlier this year at the UTEP Springtime stopping the clock at 12.63. Her time of 12.57 demolished that record and sets a personal best.

Korir and Amusan add to UTEP’s total of NCAA Champions to 107. Korir becomes just the second Miner to ever win the 800m NCAA title, while Amusan is the first to ever achieve the NCAA crown in the 100m hurdles.

Two other Miners competed on Saturday evening. Samantha Hall in the women’s discus throw and Lucia Mokrasova completing the final three events in the women’s hepthathon.

Hall showed poise in the first flight of two in the discus event. The senior launched the discus out to 54.66m (179-4), placing 10th overall and just narrowly missing out of the top nine who advance to the event’s final. The Jamaican native finishes her career at UTEP ranking fifth on the all-time list for the indoor shot put (14.90m), fifth in the outdoor shot put list (14.77m) and holds the school record in the discus throw (58.50m). Hall is a two-time Conference USA Champion in the discus throw. Hall garnered All-American second team honors.

The UTEP track and field team close out the 2017 campaign with two women conference titles both indoor and outdoor. The 2017 C-USA Outdoor Championship title was the first outdoor conference title in women’s program history. The Miners finish with three outdoor All-Americans, Michael Saruni, Korir and Amsuan and a second team All-American (Hall).