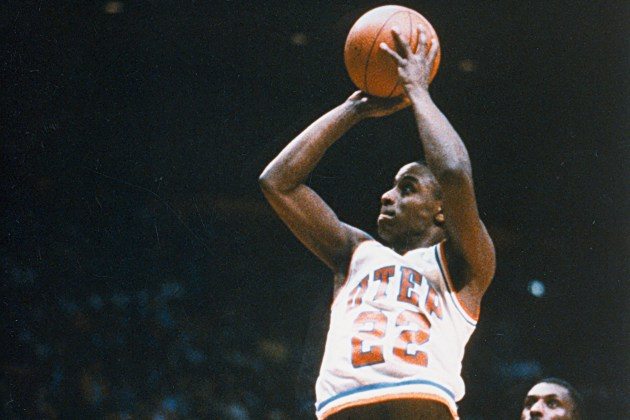 Jeep Jackson, one of the most beloved players in UTEP basketball history and the heart and soul of the great Miner teams of the ‘80s, will be honored at UTEP’s game versus UAB on Thursday, Feb. 2 in the Haskins Center.

Jackson is being recognized 30 years after his passing at the age of 23.  He died less than two months after playing his final game for the Miners.

Jackson played in 124 games for the Miners, collecting 875 points.  He still ranks fourth in school history in steals (165) and seventh in assists (313).

Jackson passed away on May 2, 1987.  Autopsy reports showed that the cause of death was birth defects in his heart.

“He had tremendous heart, tremendous swagger and tremendous confidence,” UTEP coach Tim Floyd, who was an assistant with the Miners when Jackson was on the roster, said.  “He had a great smile and he was a great, great player. He was the guard that we really needed to affect winning.  We had great bigs, great twos and great threes prior to his arrival. But we always came up a little bit short.  It’s not coincidental that after Jeep arrived, the string of conference championships and NCAA Tournament teams began.

“It seems incredible that it has been 30 years.  You remember his giant personality like it was yesterday.  His spirit and enthusiasm really rubbed off on our crowds.  He was such a hustler and such a winner.  He made it easy for our fans to stand up and cheer.”

In-game elements will be Jeep Jackson themed.  Halftime will feature a tribute video and a special appearance by former Miner Wayne “Soup” Campbell, who will share his recollections of Jeep and introduce members of his family who will be in attendance.

Tickets are on sale now by calling 747-5234.  The Miners will also host Middle Tennessee on Saturday, Feb. 4 for their annual “Noche Latina.”