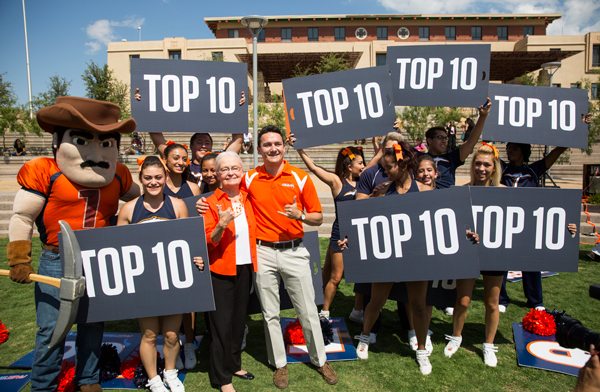 For a third consecutive year, The University of Texas at El Paso (UTEP) is ranked among Washington Monthly magazine’s Top 10 national universities in 2015. UTEP remained ranked #1 for the fourth year in a row in the category of social mobility.

“UTEP has had great success at providing accessible and excellent opportunities in higher education to the El Paso region,” said UTEP President Diana Natalicio. “It comes from the commitment of our faculty, staff, alumni and supporters who work hard to make sure our students not only have the opportunity to earn an affordable college degree, but also that they are prepared to compete with their peers across the globe.”

Most impressively, the #1 ranking in the social mobility category exhibits how UTEP holds open the doors of higher education for those who would most benefit from college. The category seeks to measure universities’ success in outperforming predictions for the graduation of first-generation and low-income students. Social mobility is when people are able to improve their life circumstances regardless of where they start out in life.

Seventy-three percent of UTEP students who earned a bachelor’s degree during the 2013-14 academic year received Pell Grants, which are awarded to students with financial need. The average annual family income of UTEP students in that same graduating class was $30,031, placing them in the nation’s lowest income group. Thirty-nine percent of their families earned less than $20,000 a year.

UTEP’s success in recruiting, retaining and graduating these students demonstrates that talent crosses gender, ethnic and socioeconomic boundaries, and that an investment in a UTEP degree yields high returns, both for students from a broad range of backgrounds and for U.S. global competitiveness in the 21st century.

Washington Monthly magazine rates schools based on their contribution to the public in three broad categories: social mobility, research (producing cutting-edge scholarship and doctoral graduates) and service (encouraging students to give something back to their region and nation).