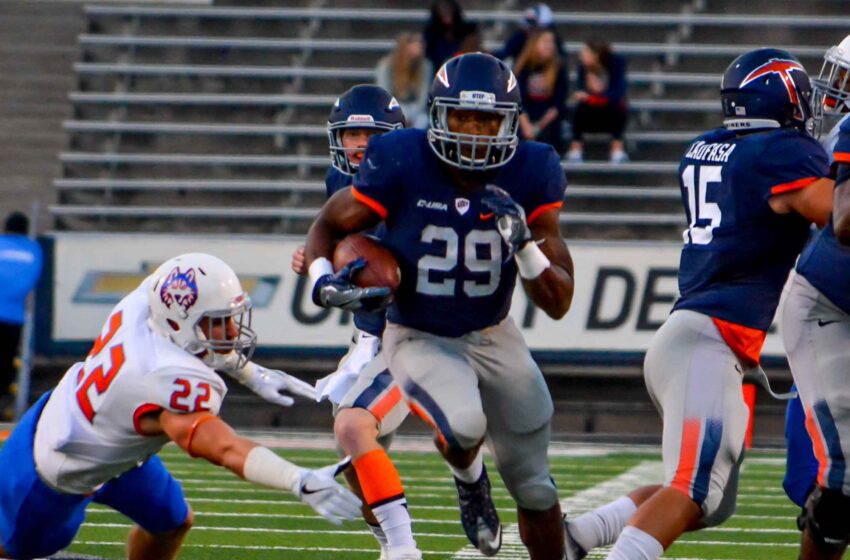 Football’s Aaron Jones and Track & Field’s Tobi Amusan were named the UTEP Male and Female Athlete of the Year, respectively, at the 43rd annual “Dinner With the Miners” banquet on Thursday night at the Wyndham El Paso Airport.

Jones became UTEP’s all-time leading rusher (4,114 yards) in 2016, breaking a school record that had stood for 28 years.  He ranks seventh on the all-time Conference USA rushing list.  Jones set a school single-season record with 1,773 rushing yards.  He was named a third team All-American by the Associated Press and first team All-Conference USA.

Jones became only the second player in school history to rush for 300 yards in a game, and the first in 51 years, when he rambled for 301 yards against North Texas.  He was named the Tyler Rose Award National Player of the Week for his effort.  Jones compiled 17 rushing touchdowns (third in school history), 2,006 all-purpose yards (fourth) and scored 120 points (third).

He led Conference USA and rated third nationally in rushing this season, collecting 147.8 yards per contest.  He went over the 100-yard rushing mark seven times, and had 200+ yards in three games.

Amusan made her mark during the 2016 outdoor season, receiving numerous accolades including first team NCAA All-American,

Conference USA Track Athlete of the Year and C-USA Freshman of the Meet.  She competed at the 2016 Olympics and World U20 Championships.  She broke a 33-year old school record, and posted the fourth-fastest time in the nation in the 100-meter hurdles (12.83 seconds).

Amusan was the C-USA High Point Scorer of the Meet.  She recorded a sixth-place finish in the 60-meter hurdles at the NCAA Indoor Championships to earn All-American honors.

Davis earned All-Conference (first team) and All-Region (second team) accolades for the fourth time in as many years, making her the first Miner to achieve the feat.  She started all 22 matches, tallying six goals and eight assists for a team-high tying 20 points.  She posted five game-winning goals.

She helped the Miners register their most wins (13) in seven years and advance to the semifinals of the Conference USA Championships.  She was voted to the NSCAA Senior Women’s College Scholar All-America Team and the C-USA Women’s Soccer All-Academic Team.  Davis also compiled over 100 community service hours during her UTEP career.

The Silver Anniversary Miner Award is presented to an individual who had a distinguished college athletic career, and has continued to contribute to UTEP and the El Paso community.

Brandl played for the Miners from 1988-91 and is the school’s all-time leader for assists (4,210) and service aces (148).  She was a second team Verizon Academic All-American as a junior and senior and was the recipient of an NCAA Postgraduate Scholarship in 1992.

Brandl finished her Premedical Education at UTEP in 1992.  She completed her Medical Education from Texas Tech in 1996 and her Obstetrics and Gynecology Residency at Baylor Medical Center in Dallas in 2000.  She became a certified OBGYN in 2002 and today operates her own private practice, Lifesteps OBGYN, in El Paso.  She has received numerous awards in the medical field and is a former Vice Chairman for Providence Hospital.

Brandl has also volunteered as a volleyball coach at St. Mark’s School and Mount Franklin Christian Academy in El Paso.

The grade point average award was presented to the tennis team, and the community service award went to volleyball.

“Dinner With The Miners” is made possible by the El Paso Downtown Lions Club. The event was inspired by past Lion president John Phelan. In 1979, a $10,000 memorial endowment was established. Due to the overwhelming community support of the event, the memorial fund was raised to $100,000 in 1983.

A second endowment has already been established and continues to grow each year. These two endowments provide funds annually to offset the cost of student-athlete scholarships.