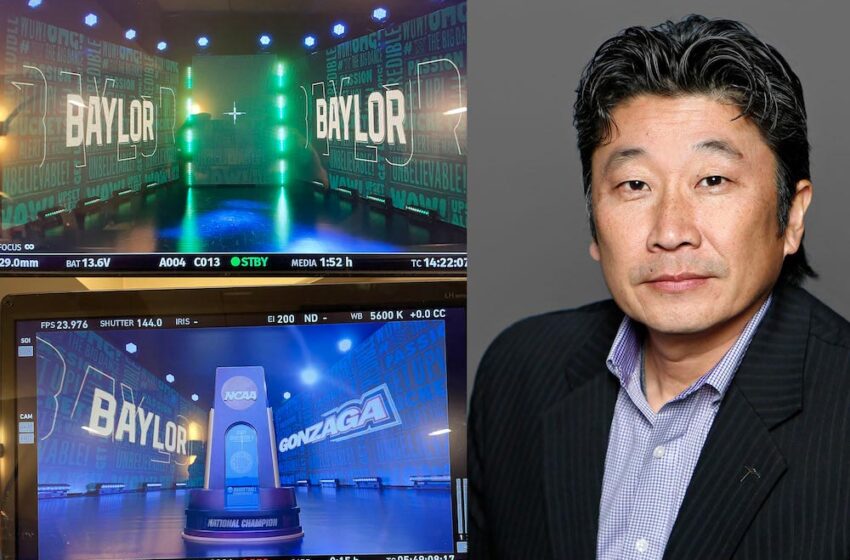 Hideaki Tsutsui, associate professor in the Department of Theatre and Dance, is an in-demand expert in the field of lighting design. He recently helped CBS Sports with its NCAA men’s basketball Final Four coverage, and will help the network with an upcoming NASCAR event.

While teams shone bright on the court during the recent 2021 NCAA Final Four men’s basketball championship, a faculty member from The University of Texas at El Paso used his skills to enhance the participants for specialty shoots that augmented the CBS Sports coverage.

CBS event producers worked with Hideaki Tsutsui, associate professor in the Department of Theatre and Dance, as a lighting designer and programmer for recorded pieces that introduce or feature players and coaches that are interspersed throughout the pre-game show and the game.

This was Tsutsui’s third year as part of the Final Four’s production team. He worked closely with the person who prepares the camera angles. Part of his job was to offer different lighting design looks.

“Things change a lot so being flexible and adaptable is important,” Tsutsui said after his return from the Final Four, which was conducted April 3-5, 2021, in Indianapolis, where Baylor University was crowned this season’s champion after an 86-70 win against Gonzaga University. Sometimes his ideas are accepted and sometimes not. “It’s important to remember that you are part of a very large team and we’re trying to make one thing in a very short period of time.”

He said the pandemic made this year’s event, which already involved hectic 12-hour days, even more stressful. The COVID-19 testing protocols were constant and the technical crews were separated in different rooms.

Tsutsui said that he has worked on national projects since 2008 and the opportunity to use the latest technology is the main reason he takes these assignments, which he considers research projects. He learns and uses cutting-edge equipment and then shares what he discovered as well as what he has experienced with his students.

Cristina Goletti, chair and associate professor in the Department of Theatre and Dance, called Tsutsui an invaluable resource whether it be for his “impeccable” work on department productions or through his professional contacts who seek his expertise in lighting design. She said those projects have led to great opportunities for UTEP technical theater students to join him as assistants on important sets and venues around the world to include the annual Lantern Floating Festival in Hawaii.

“Above all, Mr. Tsutsui is a kind, generous individual; a great colleague who always is pushing us to be better and do better for our students and our community,” Goletti said.

Tsutsui continues to be in demand as CBS Sports hired him to help design the lighting for specialty shots tied to an upcoming NASCAR event in Charlotte, North Carolina.