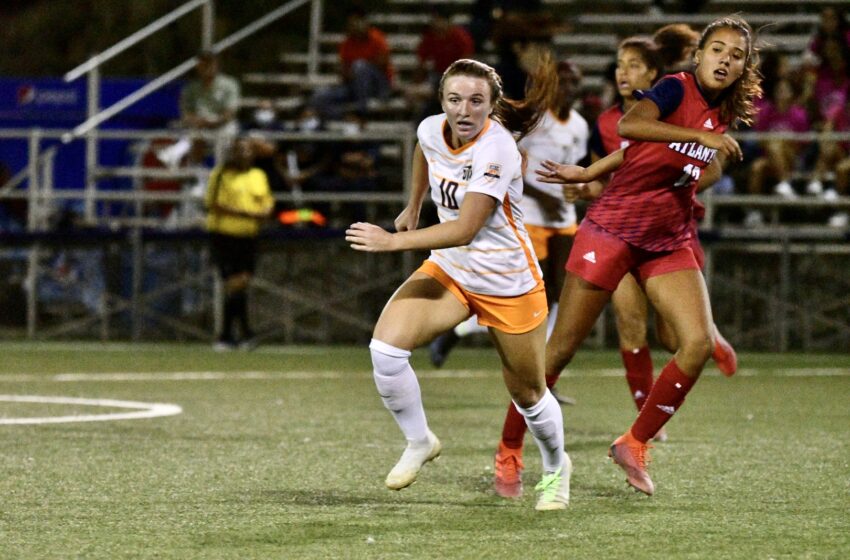 The UTEP soccer team (3-9, 1-4 C-USA) recorded nine shots, including five on target, but FAU’s (4-5-4, 2-1-2 C-USA) Maddison Krstec found the back of the net with less than two minutes to play to lift the visitors past the Miners, 1-0, at University Field Saturday evening.

Freshman GK Luisa Palmen was credited with three saves in the match. FAU netminder Amit Cohen made five saves. There was also a shot by the Miners that went off the crossbar.

Vic Bohdan fired off a game-high tying three shots to pace the way for the Orange and Blue offense.

Saturday marked the 10th time out of 12 contests on the year that the match was decided by one goal.

“We were in that game to the end,” UTEP head coach Kathryn Balogun said. “We played really good defense for 87 minutes. We created some really good chances in the second half that didn’t go our way. At the end of the day there’s no excuse, but I’m proud of the effort that we gave and the soccer that we played.”

UTEP created the first chance of the contest with a couple of passes setting up Kristen Prevosto. She unleashed a shot that was turned away by Cohen in the ninth minute. Only 45 seconds later it was the Owls on the offensive, but Palmen snuffed out the shot from Miracle Porter.

The Miners’ defense then did its job, blocking a pair of shots in a span of two minutes midway through the frame. One of them came right on top of Palmen after a corner. FAU decided to test Palmen from 10 yards past midfield in the 32nd minute, and the German native easily corralled the chance from Molly Setsma.

UTEP staved off three corner kicks over the final 11 minutes of the half, including two inside the final two minutes, to send the match scoreless into the second stanza.

Palmen was called upon two minutes into the second half, turning away the shot from Hailey Landrus. There were three shots in three minutes, one by UTEP and two by FAU, starting in the 60th minute but all were off the mark. Bohdan forced Cohen into a diving stop in the 66th minute.

It was back-and-forth for the next 22 minutes before Krstec put away a cross from Bri Austin with only 108 seconds remaining in regulation. UTEP had an incredible response after conceding the go-ahead goal. It notched three shots, including two on target, in the waning minutes but couldn’t come up with the equalizer.

The Orange and Blue return to play at Middle Tennessee at 6 p.m. MT on Oct. 15.