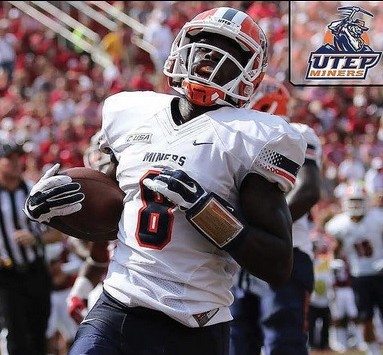 FAYETTEVILLE, ARK. – Brandon Allen threw touchdown passes on Arkansas’ first four possessions – two to Keon Hatcher — and the no. 18 Razorbacks had another scoring frenzy to open the second half en route to beating UTEP, 48-13, on Saturday.

Arkansas (1-0) amassed 384 yards of offense in the first half behind Allen, who completed 10-of-13 passes for 256 yards.  They finished with 490 yards before a season-opening crowd of 67,708 at Donald W. Reynolds Razorback Stadium.

UTEP (0-1) had difficulty slowing Arkansas in the opening half, but enjoyed some success on offense against a team that hadn’t allowed a point at home since late October of 2014.  The Miners marched deep into Razorback territory a couple of times, cashing in with a 38-yard field goal by Jay Mattox and a 10-yard scoring run by Autrey Golden.

The Miners were within striking distance at halftime, trailing 28-10, but the game got out of hand in a hurry.  Arkansas scored two touchdowns in the first 2:03 of the period to build a 42-10 lead.  Henre’ Toliver picked off Leftwich on UTEP’s first play of the second half and Alex Collins followed with a seven-yard rushing TD.  Then, after the UTEP offense went three and out, the Miners had a bad snap in punt formation and Kody Walker punched it in from three yards out.

Arkansas tacked on a 19-yard field goal by Cole Hedlund, making it 45-10, after UTEP turned it over with another bad snap.

Mattox kicked a 44-yard field goal with 3:01 left in the third quarter.

Nik Needham fumbled on the Miners’ first punt return of the season with about 10 minutes remaining and Hedlund nailed a 27-yard field goal to complete the scoring.

UTEP finished with 204 yards.  Aaron Jones had a good day against the Razorbacks’ vaunted defense with 70 yards rushing and a career-high 83 yards receiving.  He moved into ninth place on the Miners’ all-time rushing list (2,202 yards).

Allen completed 14-of-18 passes for 308 yards for the Razorbacks, who had a 100-yard rusher and receiver.  Collins compiled 127 yards on 12 carries, while Hatcher reeled in six catches for 106 yards.

The Miners will play the second of three straight road games to open the season next Saturday (Sept. 12) at Texas Tech.  The game will be televised by FOX Sports with a 1 p.m. mountain start time.