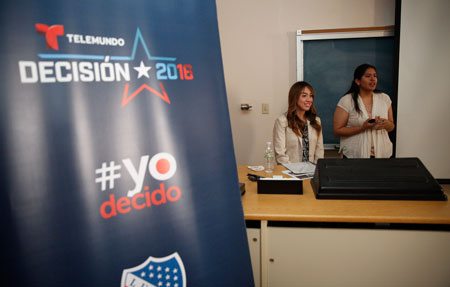 Anyone familiar with voting trends knows that it is tough to get people to the polls. Look deeper at the numbers of Hispanics who vote and the percentages spiral lower. A local television station wants to buck that trend and asked The University of Texas at El Paso for help.

Leaders from Telemundo KTDO-TV (Channel 48) contacted faculty in UTEP College of Business Administration’s Department of Marketing and Management in November 2015 about a possible collaboration tied to the Spanish-language station’s #Yo Decido (I Decide) campaign for the 2016 U.S. presidential election

The idea turned into a semester-long extracurricular contest overseen by UTEP’s American Marketing Association (AMA) chapter. Student teams started to work on the project in February 2016. Station officials requested a multimedia campaign that focused on the growing number of Hispanic “millennials,” people born approximately between 1981 and 1997. The name refers to people who came of age in the new millennium.

The competition was settled after four station-affiliated judges selected a concept that promoted the power of one person to make a positive difference and motivate others by exercising their right to vote. The winning team earned $800 and will see its work broadcast locally later this summer after some additional tweaking.

Cristina Acosta, senior marketing major, said the contest was a huge opportunity to gain real-world experience. She said her team learned about the need for trust, teamwork, sacrifice and a balance between creativity and organizational discipline.

“This was hard work, but it expanded our horizons,” she said a few minutes after her group was announced the winner. “It was a great team effort. We had a lot of ideas and brought them all together. I hope we can do more projects like this.”

They presented the judges with a campaign that included web, print, radio and television components. The focus was on an elementary school-age girl working on an assignment dealing with superheroes. The girl sees her mother grocery shopping, cooking, doing homework on a laptop, and voting. She draws her mother wearing a cape in several panels titled “super strength” and “super speed,” but she does not know what to call the panel where her mother is voting. The teacher suggests that it is the power to change the world.

Both teams touted their research into Telemundo’s mostly young, educated female audience with children, and millennials, who were

described as hard-working, proactive, on-the-go multi-taskers interested in change. However, they also have been described as being less involved civically with minimal interest in voting.

Denisse Olivas, marketing lecturer and one of the project’s lead mentors, said the students were grateful and enthusiastic with the opportunity to work with the local affiliate of Telemundo, a division of NBCUniversal Hispanic Enterprises and Content that reaches U.S. Hispanic viewers in 210 markets across the United States and Puerto Rico.

“I think they were both amazing campaigns,” Olivas said of the presentations. “They picked concepts that were fresh and based on their research. It showed that they knew their markets.”

Helping Olivas to guide and encourage the students was Roland Gau, Ph.D., assistant professor of marketing and adviser to UTEP’s AMA

chapter. He said he was impressed with the students’ creativity and depth of research.

“This was a wonderful project because it ties in with what we teach and the students’ skill set,” Gau said. “We know voter engagement is low. This issue is salient to Hispanics in the U.S.”

Yadira Azcona, KTDO’s marketing director, presided over the day’s competition. She explained the contest rules to the judges and audience members that included faculty, staff and Robert Nachtmann, DBA, dean of the College of Business Administration.

“I was happy we could partner with UTEP,” said Azcona, who met with the student teams every other week to monitor their progress and offer advice. She said she saw the students develop a sense of how to prepare a professional campaign with the right imagery and message. “This was an exciting opportunity to participate in an important cause. The students did a fabulous job.”

Azcona said that it was possible that the campaign could grow regionally or nationally if it resonates with Telemundo’s audience.

Nachtmann said the competition was a valuable training experience that gave students the chance to display their knowledge and exercise their presentation skills. He praised them for trying to put their fingers on two hard-to-define targets: Hispanics/Latinos and millennials.

“I travel around the country and I guarantee that (Hispanics and millennials) are not all the same,” he said.