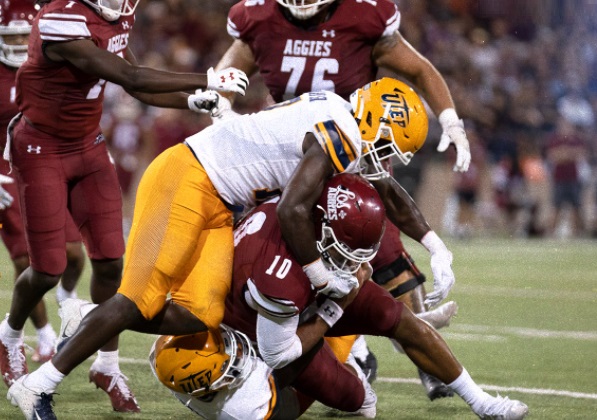 UTEP claimed the Brass Spittoon and Silver Spade traveling trophies for the first time since 2016, while it marked the first win for the Miners in Las Cruces since the 2015 season. The announced attendance at Aggie Memorial Stadium was 19,034.

“Obviously, I am pleased get to get a win in our first game,” head coach Dana Dimel said. “I think it’s really important to play an archrival in an opening game. I like the outcome of what happened. Anytime you get a road victory, you’re super happy as a coach. For a first game, it was frenetic but it wasn’t frenetic in the way that really worries you as the head coach. It wasn’t like we’re having personnel issues or we’re doing silly mistakes or turnovers, it wasn’t like we were giving up a lot of big plays defensively and then just turning guys scot free. We did a time or two, but I have a lot of respect for NM State’s offense. They do a great job and they are a hard team to keep from scoring points.”

The 190 total offensive yards by NM State marked the least yards allowed by a Miner defense since Oct. 25, 2014, at UTSA. The three points allowed by the Miners is the least allowed to NM State since shutting out the Aggies in 2004.

UTEP’s offense looked well-oiled early on with the Miners jumping out to 17-0 lead over the Aggies by the end of the opening quarter.

Jacob Cowing was Gavin Hardison’s favorite long-ball target with the sophomore receiver enjoying a career day with 158 yards and a touchdown. Cowing’s previous career standard was 145 receiving yards at Charlotte in 2019.

UTEP compiled 452 yards of total offense on the night, while only being forced to punt twice in the game. The Miners were a perfect 4-for-4 in the red zone.

Hardison was 11-of-16 passing for 249 yards and a touchdown, while Cowing led the Miners in receiving, followed by Justin Garrett with four catches for 74 yards.

The Miners opened the scoring with a 5-play, 80-yard drive that was capped off by a 5-yard touchdown run by Deion Hankins, the 10th of his young Miner career. Gavin Baechle then added a 35-yard field goal to make it 10-0 with just over nine minutes to go in the first quarter.

Ronald Awatt expanded on UTEP’s lead at the end of the first after breaking away for a 34-yard rushing touchdown that capped off a 6-play, 80-yard scoring drive and made it a 17-0 lead for the Miners.

UTEP used all four running backs in the win, while Awatt led the way with 11 carries for 74 yards and a touchown. Hankins also had 11 touches for 50 yards and a score, while Quardraiz Wadley had six carries for 51 yards on the night.

NM State made their first dent in the game to open the second quarter with a 27-yard field goal by Ethan Albertson after missing on a 38-yard attempt in the opening frame.

Baechle got UTEP’s 17-point lead back at the end of the first half with a 27-yard field goal of his own to send the Miners into the break with a 20-3 lead.

The Miners ended the first half with 273 yards of total offense compared to 110 by the Aggies, who were stifled by the UTEP defense and held to just three points and forced to punt three times before halftime.

Dy’vonne Inyang tied a career-high with six total tackles (4 solo) in the win over the Aggies, while the Miner defense combined for three sacks (Jadrian Taylor, Praise Amaewhule, James Neal), 6.0 tackles for loss and two forced fumbles. NM State did not record a sack in the game.

UTEP continued to air it out offensively to start the third quarter as Hardison once again targeted Cowing, who brought down a 59-yard touchdown reception to make it a 27-3 advantage for the visiting Miners.

A 32-yard field goal by Baechle continued his perfect streak on the night and stretched UTEP’s lead to 30-3 over the Aggies with about four minutes remaining in the third.

UTEP’s home opener versus Bethune-Cookman is scheduled for Saturday, Sept. 4 at the Sun Bowl and will kick off at 7 p.m. MT.

Season tickets and multiple ticket packages are on sale for the 2021 UTEP Football season. Season ticket prices start as low as $65 and flexible payment plans are available. Single-game tickets to watch UTEP football vary by game and location within the Sun Bowl.

JACOB COWING TOUCHDOWN!! He took the rock 59 yards to the 🏠

Cowing with those good 👐 pic.twitter.com/vrb9tcJZda