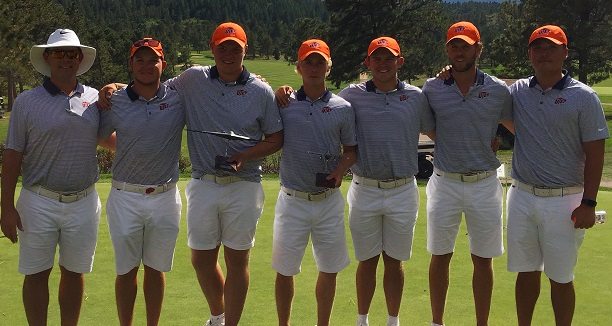 Colorado Springs, Colo.- The UTEP men’s golf team tied for first place at the Gene Miranda Falcon Invite on Sunday in Colorado Springs, marking the second consecutive year that the Miners have won a tournament title.

UTEP also took first place at the Herb Wimberly Intercollegiate in October of 2015 in Las Cruces.

“I’m just real proud of how our guys played,” head coach Scott Lieberwirth said.  “We had a few mistakes here and there, but all in all our guys competed extremely well.  Hats off to UNLV for putting together a great round today.  They played great coming from behind and tying with us.”

“He was huge, he was a rock for us,” Lieberwirth said. “He didn’t play poorly today but he just got beat by the kid from UNLV who had a great round and just passed him. For his first time playing this golf course, he played unbelievably well. For him to shoot seven-under-par in these conditions on a course he didn’t know, that’s phenomenal.”

“We’re going to enjoy this win today and we have some good momentum to start off our season,” Lieberwirth said.  “We’ve got a very important tournament coming up in two weeks in Albuquerque.  It’s really big for us to have a good showing there. It was a great start, the guys are excited so we have some confidence.”

It was a stellar start to the 2016-17 season, one that will continue at the William H. Tucker Invitational Sept. 23-24 in Albuquerque.