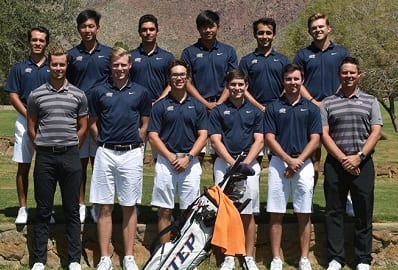 The UTEP men’s golf team will head up I-10 to compete at the Herb Wimberly Intercollegiate hosted by NM State October 15-16 at NMSU Golf Course (par 71/7,242).

The Miners are coming off their best finish of the season, placing sixth (of 12) at the Paintbrush Invitational October 8-9.

“It’s definitely been a rough start to the season. We’ve played some really tough courses in some tough conditions, but I think we’re going to be better off for it in the long run,” UTEP men’s golf head coach Scott Lieberwirth said. “Definitely in the short term, we’ve struggled to find enough depth to get us good enough team scores to compete.”

The Miners will be back in familiar territory when they compete in Las Cruces the next two tournaments, including UTEP’s own event the Pepsi-Cola Classic October 20-21 at Red Hawk Golf Course.

“We’re definitely excited to have a chance to play close to home here in the last two events of the fall and places that we are quite familiar with. I think that will definitely help,” Lieberwirth said.”

All 10 Miners (Oskar Ambrosius, Santiago Castilla, Cole Donielson, Ben Getman, Eduardo Gonzalez, Marcus Khaw, Settavut Paradee, Aaron Terrazas, Nattapol Udomrat and Greg Yellin) will make the trip to Las Cruces. For Donielson and Yellin, this will be their first action of the 2018-19 season.

UTEP did fight tough conditions during the first two tournaments of the season as they were cut short due to rain fall. The Miners played two rounds at the Lone Star Invitational in San Antonio and another pair of rounds at the Golfweek Conference Challenge in Cedar Rapids, Iowa, to open the new campaign.

The squad finally completed three rounds at the William H. Tucker Intercollegiate at UNM Championship Golf Course. However, weather was a challenge again as snowy conditions kept halting the start time and suspending play at the Paintbrush Invitational in Denver, Colo., recently, but all 54 holes were completed.

Ambrosius didn’t let the conditions in Denver affect his play as the sophomore came up with a solid outing at the Paintbrush Invitational. Ambrosius (76-70-72—218) registered his first career top 10 finish (tied for 10th) at 2-over par, his lowest career score. It was also the second time during the fall that he finished as the top Miner.

Ambrosius opened the Paintbrush with a score of 76 in the first round, but responded with a season-low 70 in the second and shot par during round three.

“The sky is the limit for him (Ambrosius) as far talent and his ability level,” Lieberwirth said. “He’s starting to make a couple of correct changes in his golf game and a couple of adjustments in his swing. He’s really starting to take to it and I would expect him to continue to play well. He’s gaining confidence and I think this last tournament was a big confidence booster for him.”

Ambrosius has competed at all four tournaments during the fall and has recorded a 74.9 stroke average, ranking second on the team. Terrazas, who placed tied for fifth at the Golfweek Conference Challenge, ranks first on the squad with a 74.4 stroke average in eight rounds (three tournaments) of play.

Paradee shot a season-low 72 at the Paintbrush and has a 76.8 stroke average. Khaw is the other Miners to have competed at all four events during the fall season. Khaw shot a season-low 74 in round three at the William H. Tucker.

Live scoring is available via: www.golfstat.com.