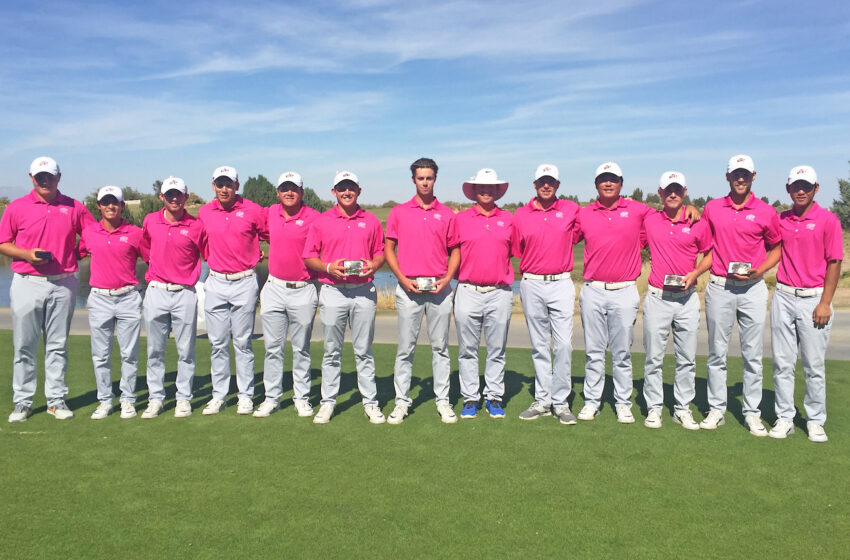 The UTEP men’s golf team took the championship at the Price’s “Give ‘Em Five” Invitational on Sunday at Butterfield Trail Golf Club. The Miners took the lead Friday and never looked back, winning their only home tournament of the season with a 35-under-par 829 (276-280-273).
The Miners beat second-place UTSA by 13 strokes.  The Roadrunners finished with a 22-under-par 842 (282-289-271). UTSA’s Zander Lozano won the Price’s tourney, finishing with a 14-under-par 202 (66-70-66).
“We had a double-digit lead pretty much throughout the day but we had gotten off to a poor start,” head coach Scott Lieberwirth said. “Nobody was really making a charge until UTSA, in the middle of the round, started playing really well.  But that was about the same time we were turning things around. When it got late in the round and we only had a couple of holes left, we still had a 12-shot lead. We knew it was pretty much done at that point.”
Leading the Miners was Andreas Sorensen, who finished the tournament in second place behind Lozano with a 12-under-par 204 (66-70-68). The sophomore carded 14 birdies and one eagle in the final round.
Prescott Mann, playing as an individual, stayed near the top of the leaderboard all weekend and finished in a tie for third after firing a 10-under-par 206. The redshirt junior, who placed 11th in last year’s Price’s tourney, tallied up 15 birdies and two eagles.
“He [Mann] played great,” Lieberwirth said. “I’m really happy for him. He’s always played this course fairly well and this week was no exception.  He put three very good rounds of golf together.”
Nicklas Pihl finished the tournament in a tie for fifth after shooting a seven-under-par 209 (71-69-69) and teammate Frederik Dreier moved up the leaderboard after an unusually slow start to end the tourney in ninth place. The Miners’ lone senior shot a six-under-par 210 (76-70-64) in his final Price’s tourney showing.
“I was very happy to see him [Dreier] come out of his mini-slump and do what he did today, shooting 64 and showing the kind of senior leadership that he’s shown all year,” Lieberwirth said. “That was a great round of golf he played today. I was definitely happy for him and just happy for all the guys. We bounced back from that poor start to turn it into the best round of the tournament for us.”
Ben Getman ended the tourney in a tie for 15th with a two-under-par 214 (71-71-72) and Charles Corner tied with teammate Chad Ahn for a 36th place finish with a four-over-par 220. Corner shot rounds of 68-73-79 and Ahn, playing as an individual, shot 72-76-72. Among the rest of the individuals, Cole Donielson finished in a tie for 44th with a seven-over-par 223 (76-73-74) and Evan Macias finished close behind in a tie for 49th with an eight-over-par 224 (75-73-76). Eduardo Gonzalez ended his first Price’s tourney in 71st with a 21-over-par 237 (76-85-76) and Settavut Paradee rounded out the Miners’ scorecard in a tie for 73rd with a 27-over-par 243 (76-85-82).
“There’s a little bit of relief, I would say, with the win,” Lieberwirth said. “At home, we always tend to put a lot of pressure on ourselves. That’s common, and it looked like that a little bit this morning. But the way we bounced back and started making birdies, that was incredible.”
It marks the third win for UTEP in five fall tournaments. The Miners won a share of the Gene Miranda Invitational title Sept. 11, the Fighting Irish Classic Oct. 11 and also had a runner-up showing at the Herb Wimberly Intercollegiate on Oct. 18.
“This [fall season] has got to be up there as one of the strongest in this program’s history,” Lieberwirth said. “They’re [wins] all special, but this is one that I know our guys were highly motivated to want to win and be the first team to win our home event. No question that the guys are super excited about this.”
The Miners will be back in action for the spring season when they travel to Tucson, Arizona Jan. 23-24 for the Arizona Intercollegiate.
“We know we’ve got some good players here and we’ve got a ton of confidence right now,” Lieberwirth said. “We’re going to have some offseason time to relax, to maybe try to improve a little bit in some areas, and after that we’ve got Arizona coming up in about two and a half months, it’s not that far away. We’re going to definitely get to work when the spring comes. All this is nice but in the spring season we’re going to see a lot of very good competition and the strength of our tournaments get much tougher. We’re well-positioned, we did exactly what we wanted to do in the fall, and we’re positioned to really be a national contender in the spring.”
Tags: utep golf