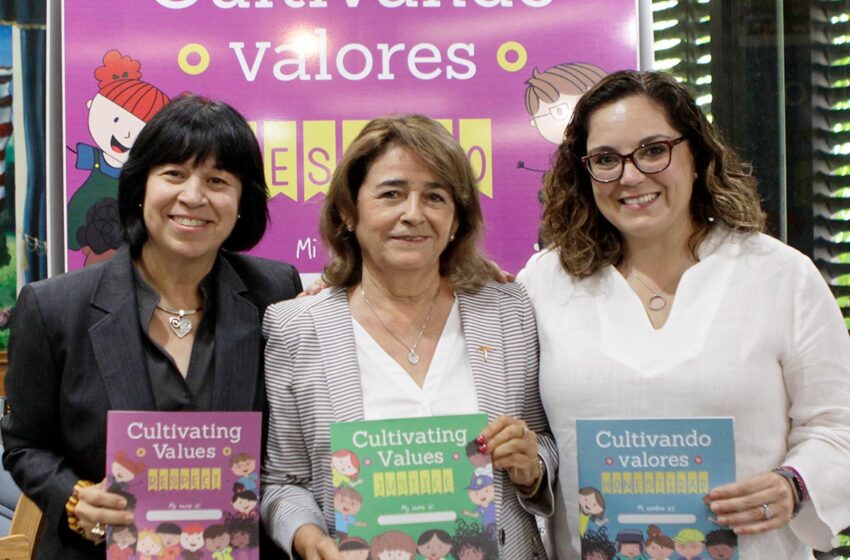 You are a student in the schoolyard and you witness a group of kids bullying one of your classmates. You want to help, but you’re hesitant because the aggressors are bigger than you. What do you do?

This is one of the scenarios presented in a new handbook for public school teachers and educators designed to teach children on both sides of the U.S.-Mexico border about respect, honesty and justice.

The handbook is part of a series of colorful illustrated bilingual booklets titled, “Cultivating Values.” The General Consulate of Mexico in El Paso developed the binational initiative in collaboration with The University of Texas at El Paso and other community partners to help elementary school children understand the importance of practicing these values in and out of the classroom.

“Schools play a significant role in children’s development, and must include character development that inculcates moral values that teach children right from wrong and to be good citizens in our society,” said Josefina V. “Josie” Tinajero, Ed.D., UTEP professor of bilingual education.

Tinajero is one of three UTEP faculty members, including Eva Moya, Ph.D., associate professor of social work, and Lucía Durá, Ph.D., assistant professor of rhetoric and writing studies, involved in the project.

“We believe that respect, honesty and justice are the foundation for how a child learns to treat others, how to think and how to show respect for others throughout their lifetime,” said Moya, interim chair of the Department of Social Work and the project’s leader. “It affects our ability to behave and express ourselves with sincerity and integrity but also to stand firm on what we believe.”

The booklets are filled with examples of what it means for children to be just, honest and respectful. They include lessons on topics such as following rules, saying sorry and listening to others. They will be distributed to schools in El Paso and Juárez. Among the first schools in El Paso to receive them are La Fe Preparatory Academy, Canutillo Elementaryand Mesita Elementary.

“Video games, television, the internet and movies are having a tremendous influence on children’s thinking and development,” Tinajero said. “Teaching values such as respect, honesty and justice should be an integral part of a child’s self and identify and must be part of the school curriculum.”

As part of the project, researchers asked 1,500 public school students ages 8-10 in El Paso and Juárez to submit drawings of what they thought respect, justice and honesty looked like in school, at home and in the community.

“We said, ‘Give an example of respect in your school,’” Durá explained. “When people are being respectful, what is happening? When they’re being disrespectful, what does that look like?’ Then they had to draw an animal that they associate with respect and explain why, so there was an abstract component to this.”

Based on the data they collected, researchers wrote stories that describe how children interpreted these values. They worked with Sarahi Serna Macias, a graphic designer in Juárez, to illustrate the stories.

They also collaborated with public school teachers on both sides of the border to develop a handbook that contains activities for each value. For example, students are encouraged to design posters of how they feel when others are not respectful, honest or just with them. Other activities include writing a song or a poem that incorporates messages that allude to any of the three values.

The handbook also invites parents and grandparents to become involved in the co-teaching of values by having them read a story or sketch a drawing about the values they teach at home.

The first booklet, which focused on respect, was released in September 2017. Booklets focusing on justice and honesty followed.

The consulate unveiled the teacher’s handbook in June 2018 during a press conference.

“Today we are pleased because we have an instrument that unites the voice of children,” said Juan Acereto, consul of economic and political affairs at the Mexican consulate, in Spanish. “This will allow us to enter their hearts and strengthen these values that we so desperately need in our society.”

Moya expects that the lessons students learn about honesty, respect and justice in school also will expand into the community.

“Schools are natural places where we form children and where we can have important conversations about how we treat each other,” Moya said. “If we can educate children about these values in schools, then we can educate parents in communities and in households, and in work settings. Then without a doubt, we’re going to have a society that respects, that is honest and that practices justice, and that’s what we hope for.”

Moya said a fourth booklet about health is planned before the end of the year.

Copies are available upon request at the Mexican Consulate in El Paso.