UTEP responded to LA Tech scoring first on the way to a 2-2 draw on Sunday afternoon at University Field. 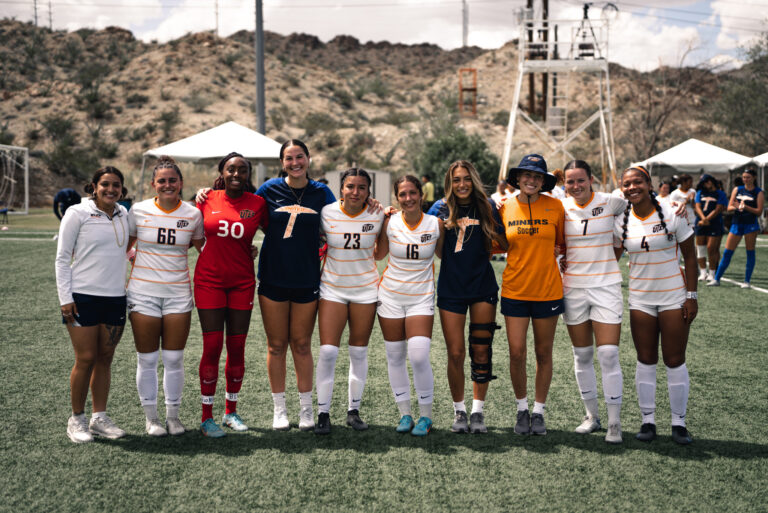 The visiting Lady Techsters (3-5-2, 1-0-1 C-USA) tallied the initial strike in the 43rd minute when Flavie Dube used her blazing speed to race past the defense for a right-footed goal.

Facing the 1-0 deficit entering the second half, the Miners responded well right out of the chutes to even things up in the 55th minute. A serve into the box by Cayman Tamez helped set up the opportunity, leading to a Mina Rodriguez shot attempt that was blocked initially. Tessa Carlin then kept with the play and received the ball with her right foot which she would use to lift a shot past the keeper.

Carlin leads UTEP with four goals on the season.

Continuing with the early second half success, it was Rodriguez once again who would spark a chance, this time for Taya Lopez in the 63rd minute. After bringing in a pass from the freshman, Lopez drove a shot into the back-left corner of the net to make it 2-1 UTEP.

With the pair of assists on Sunday, Rodriguez becomes the first Miner since 2019 to have four or more in a season.

“We believed in ourselves in the second half, and we won the half,” UTEP Head Coach Kathryn Balogun said. “The problem is we gave up too many too early to give ourselves an opportunity to win a game, but it’s the first time that I have seen our team respond when they are down in the dumps and say, ‘hey, we can do this’, and we came back in the second half and had a really good performance. We strung a lot of good looks together. That was the best half of soccer in terms of the offensive side that I have seen in a good long time.”

LA Tech delivered the equalizer in the 84th minute when Dube slid a centering pass over to Carmen Suarez directly in front of the net beyond the 18-yard box that she would launch into the back-right corner for the final tally of the day.

“We have got to be able to fight when we are tired and fight through some of those mental moments,” Balogun said. “But other than that, I am pretty proud of the second half performance.”

The Lady Techsters accumulated 14 shots to seven for the Miners on the day, including a 5-3 edge in shots on frame. The teams each had two corner kick opportunities.

Sheyliene Patolo registered two shots on the day for UTEP in what was her first start of the season.

“It’s two weekends in a row and five games in total that we are unbeaten, and that says a lot about how far we have come” Balogun said. “At the beginning of the season we were giving up four goals in a game, and now we have (put together) five games in a row without (a loss), so that’s a switch in mentality to say that hey, we can be a successful team. Now we just have to continue getting better because the season doesn’t get any easier. We’ll be on the road next week and we need to get some points on the road, and that isn’t an easy job. No one in this conference is easy, and so we just have to continue to make progress as a team getting better and taking steps in the right direction.”

The Miners travel for four of the next five games, starting next Thursday at 5 p.m. MT at WKU.