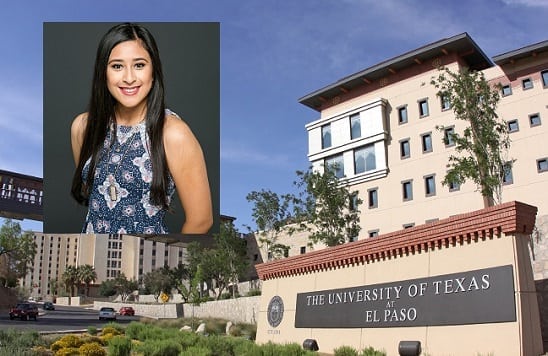 The Texas Higher Education Coordinating Board announced recently that Mayra Rodarte, a Master of Public Administration student at The University of Texas at El Paso, had received the Kenneth Ashworth Fellowship.

The fellowship provides financial assistance to Texas residents who pursue graduate studies in public affairs, public service or public administration, and plan to stay in the state after graduation to work in a public service capacity.

“Earning this fellowship will keep me motivated,” said Rodarte, who has a 4.0 GPA. “I’ll need to work hard to continue to be deserving of it.”

The El Paso native earned a full scholarship for her undergraduate work, and saved the money she earned as a research assistant with UTEP’s Academic Technologies to help pay for graduate school.

She was relieved that her “tuition” money will now be part of an emergency fund.

“Personally, it takes a (financial) weight off my shoulders,” she said. Rodarte received her bachelor’s degree in theatre arts with a concentration in stage management from UTEP in 2017.

As part of her studies, she has worked with nonprofits such as the Las Americas Immigration Advocacy Center. The experience helped her realize how such agencies assist people beyond the arts. That is what got her interested in pursuing her MPA, which she expects to receive in May 2019.

Rodarte said her situation has not dampened her academic passions to learn and help others.

Along with her studies, Rodarte is an assistant in the College of Liberal Arts Honors Program and is a paid off-campus intern with the Rio Grande Council of Governments where she helps with water planning projects.

The fellowship, established in 1997, was named after Ashworth, Ph.D., a former commissioner who served on the board for more than 20 years and had a deep commitment to public service.

“The board’s selection recognizes Rodarte’s remarkable achievements as a student, educator, and artist, as well as a deep commitment to a career in public service,” said Charles Ambler, Ph.D., dean of UTEP’s Graduate School, who sent in the student’s nomination letter.