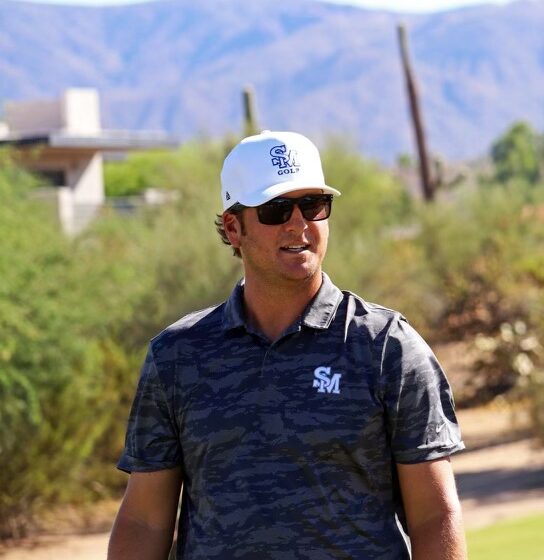 Puetz  comes to UTEP from South Mountain Community College in Phoenix, where he has spent the last seven seasons, including the last three years as the head coach for the Cougars.

Since joining the Cougars’ staff in 2014, Puetz helped lead SMCC to three NJCAA Division II National Championships (2015, 2016 and 2019) while sending numerous student-athletes on to four-year universities.

“Hiring coaches is one of the most challenging tasks of an Athletic Director and administrative team,” Senter said. “We feel extremely fortunate to have found everything we wanted in Aaron Puetz. He has a proven track record of producing winning teams, developing the whole student-athlete and doing it with less resources. Coach Puetz will thrive and lead our Men’s Golf Program to new heights as he will have everything he needs to compete for and win Conference USA Championships.”

Most recently, the team finished as national runners-up at the 2021 NJCAA Division II National Championships.

”My wife and I are incredibly excited to join the UTEP family,” Puetz said. “I am grateful that Jim Senter, Nick Popplewell and all of the staff at UTEP have trusted me to lead the men’s golf team. Everyone I met is committed to excellence and I am honored to be a part of this program. With support from the Century Club and the El Paso community, UTEP Men’s Golf is in a great position to become among the top programs in the country, and I can’t wait to get to work. Go Miners!”

Prior to his time at South Mountain, Puetz was the golf coach at TS Golf, LLC in Phoenix following a professional golf career that spanned eight years from 2006 to 2013. He was also a member of the Northern Iowa Men’s Golf team in 2002-03.

During his first four seasons at South Mountain, Puetz served as an assistant coach and served all aspects of the program, including development, recruiting, fundraising and academics. He was part of a program that captured back-to-back NJCAA Division II National Championships in 2015 and 2015, while the team won four Arizona Community College Athletic Conference Championships and 31 tournament victories from 2014 to 2018.

In August of 2018, Puetz was promoted to head coach for the Cougars and led the program to the 2019 NJCAA Division II National Championship after his squad won all 12 events that year. Puetz also successfully executed a fundraising campaign to fund the golf program.

Under his tutelage, Cougar student-athletes have collected a combined 30 All-American selections and 34 All-ACCAC accolades. Off the course, SMCC was named the 2018 NJCAA Academic Team of the Year with a 3.81 GPA. They were also named the 2020 Academic National Champions by the Golf Coaches Association of America.

Over the course of his career, Puetz has specialized in golf instruction with the use of Trackman and SAM Putt lab and tournament competition. He taught more than 3,500 golf lessons and clinics for 50 or more participants during his professional career. He also won six mini-tour events as a professional and has experience caddying on the Korn Ferry Tour.

Puetz is an active member of the Golf Coaches Association of America (GCAA). He earned his bachelor’s degree in business and marketing from the University of Northern Iowa in 2006. Despite a shortened collegiate career due to injuries, he rehabbed his way back, never finishing outside of the top 10 in amateur events before turning professional in 2006.

He went on to play professionally and accumulated several wins on mini-tours across the country. He also has caddied on the PGA Tour and coached several professional athletes.

WHAT THEY ARE SAYING ABOUT COACH PUETZ …

“Aaron Puetz has established himself as one of the top up-and-coming collegiate golf coaches in the country. His record at South Mountain has been impressive and he will do great at UTEP and the D-1 level. Aaron understands what it takes to achieve academic and athletic excellence.”

“Aaron is definitely one of the best up-and-coming young stars in college coaching. UTEP has made a great hire in Aaron. I’ve known Aaron for eight years and instantly our program was successful. Aaron is a proven winner and just gets it. I know that he will be successful quickly and he and Marie will be great in El Paso”

“Coach Puetz is a tremendous hire for UTEP. He has had huge success at South Mountain. His enthusiasm, personality, competitiveness and work ethic will be a great asset to UTEP and the entire El Paso community.”

“Coach Puetz is a tremendous coach having enjoyed success with multiple winning teams. He understands how to build a roster and he is very familiar with the Southwest. I know he is ready to take advantage of the opportunity at a program rich with history. He is a great communicator, a high-energy personality, and a perfect coach for today’s student-athlete. He will serve his team members and the entire UTEP Golf program with pride and class and I have no doubt he will elevate those around him.”

“UTEP just hired one of the best young coaches in the country in Aaron and an even better person. His ability to connect with his players and get them to perform at an elite level is what makes him so good! I know that Aaron and his wife Marie will make an immediate impact both on the golf course and in the El Paso community.”

For complete coverage of UTEP Men’s Golf, be sure to follow the Miners on social media at @UTEPMGolf (Twitter/Instagram/Facebook) or click here to visit the official home of UTEP Athletics.

Click here to view our previous stories on UTEP Golf.