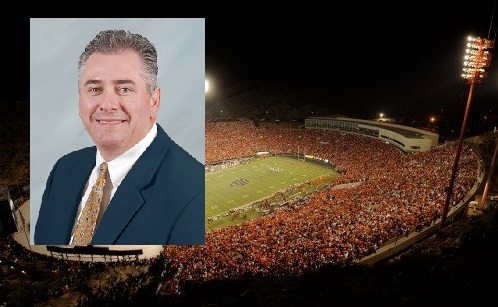 “We’re delighted to welcome Jim Senter to the UTEP family,” Natalicio said.  “He brings to El Paso extensive leadership experience in athletics administration and fundraising, most recently at The Citadel, where for the past three years, student-athletes have achieved excellence both on the playing field and in the classroom, and successful fundraising has enhanced the college athletics experience for them and their fans.  His previous experience at the University of Idaho, San Diego State University and the University of Colorado gives him a rich set of perspectives on the complexities of intercollegiate athletics in the 21st century.”

“I thank Bob Stull for his nearly 20 years of dedicated efforts to strengthen the foundation for a sustainable athletics program at UTEP, and I thank the search committee for working diligently to find the best candidate to usher in a new era of UTEP Athletics.  We’re excited about UTEP Athletics’ future under Jim Senter’s direction,” Natalicio added.

“I would like to thank Dr. Natalicio for this opportunity,” Senter said.  “I look forward to building upon the work that Coach Stull and the administration have accomplished.  There are numerous factors that you need to ensure success in athletics, and Bob has put many of them in place during his time as the AD.  I cannot wait to get to campus, acclimate to the city of El Paso and invest in the community.  I am a big believer that ‘every person makes a difference’ and we will work tirelessly to engage the community to be a difference maker for UTEP Athletics.”

Senter has served as Director of Intercollegiate Athletics at The Citadel, The Military College of South Carolina, since 2014.  The Bulldogs field 16 NCAA Division I sports (nine men’s, seven women’s).  Since taking the reins of The Citadel program, Senter has hired head coaches in football, men’s basketball, baseball, soccer and volleyball.

Over 45 percent of the school’s athletic budget is self-generated revenue, the highest figure in the Southern Conference.  Senter’s fundraising efforts have resulted in significant improvements being made to the football, basketball and baseball facilities.  He has grown scholarship endowment by nearly $6 million in cash and pledges over the last three years.  His total fundraising numbers over the last two years both set school records.

Senter grew football attendance by more than 3,000 spectators per game, and the Bulldogs led the Southern Conference in attendance.  They posted a 10-win season in 2016 and a nine-victory campaign in 2015.

Senter came to The Citadel after spending seven years (2006-13) at the University of Colorado, where he worked his way up to Senior Associate Athletic Director for External Operations.  Senter was the sport supervisor for the Colorado football, skiing, men’s and women’s golf programs.  He also had supervision over the Chief Marketing Officer and numerous other areas including facilities, sports medicine, sports performance, game and event management and equipment services.

He began his tenure at Colorado as Associate AD for Development.  In that role, his responsibilities included all fundraising efforts,

including the annual fund (student-athlete scholarships), major gifts and coordinating all donation-related activities and staff.  He was later elevated to Associate Athletic Director.

Before Colorado, Senter served as Associate Athletic Director for Development/Senior Associate AD for External Sales at San Diego State for 18 months.  Aligned closely with the University foundation, he was responsible for overseeing the athletic department’s development efforts, including major gifts.

He spent 2003-05 as Director of Athletics at Idaho State University, a 16-sport Division I-AA program.  He engineered a 19 percent increase in football attendance and a $600,000 leap in advertising, marketing and corporate sales.

Senter began his college athletic career at the University of Idaho.  After working as assistant head football coach and recruiting coordinator, he branched out into the administrative side.  He served as Assistant and Associate Athletic Director of Development from 1998-2003 in a chief fundraising capacity.  He was responsible for the university’s Capital Campaign for Athletics, helping raise money for a $13 million athletic facility expansion. He also ran the annual fund for Vandal athletics, overseeing the work of 48 national directors and planning the fiscal budget.

During his coaching days, Senter was in charge of the defensive line, linebackers and secondary.  He was a part of Idaho’s run to a 52-21 record over seven seasons and six NCAA playoff appearances.

Senter began his coaching career at Coffeyville Community College in Kansas, where he was a student assistant in 1981 and 1982.  He later held that role at his alma mater, the University of Tulsa, from 1983-85 before moving on to Idaho.

Senter earned his bachelor’s degree in physical education from Tulsa in 1985, and added a master’s degree in recreation from Idaho in 1992 while serving on the football coaching staff.

He was born Nov. 9, 1961 in Doylestown, Pa., and graduated from Jay (Okla.) High School where he was a football letterwinner.  He is married to the former Susan Beck and the couple has four children — Shawna, Derick, Matthew and Samantha.