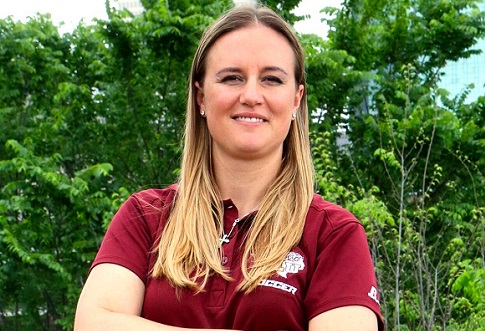 “We are excited to welcome Kathryn Balogun to the UTEP Miner Family,” Senter said. “Coach Balogun has a proven track record of doing more with less as a head women’s soccer coach. Her SWAC record while serving as the head coach at Texas Southern University was competitive. Under her leadership, the Texas Southern program increased team grade point averages and graduation rates. She has strong recruiting ties in the state of Texas and is committed to recruiting the best student athletes in our state and region. Kathryn has demonstrated experiences as a player, assistant coach and head coach. We are confident she can build a program that competes for and wins Conference USA Championships.”

“I would like to thank the Miner search committee for this opportunity, especially Director of Athletics Jim Senter and Assistant Athletic Director David Kooger,” Balogun said. “It is obvious that the Miner community shares many of the same values I do and I look forward to bringing excellence on the field, in the classroom and in the community to the Sun City. I am extremely grateful for my time at Texas Southern and in the SWAC. I believe it has prepared me well for success at UTEP. Go Miners!”

“I am very pleased with the hire of Kathryn Balogun as our new Women’s Soccer Head Coach,” said Kooger, UTEP Assistant Athletic Director for Compliance and Women’s Soccer Sport Administrator. “Throughout the search process Kathryn stood out as someone who can elevate this program to the next level. Her passion for soccer and development of the overall student-athlete will be a great fit for UTEP Athletics. I’m excited to work with Kathryn and her new staff.”

Under Balogun’s leadership, the Tigers pitched eight shutouts during the 2014 season, scored 33 goals during the 2015 campaign and combined to post a sparkling 31-13-6 record in the Southwestern Athletic Conference, while advancing to the league tournament every year. In each of the last two years, TSU lost to the eventual tournament champion on penalty kicks in the SWAC semifinals. Texas Southern finished 8-1-1 in league play in 2016.

The Tigers achieved the highest RPI in school history and posted school records for shutouts, goals scored and assists during the Balogun era.

Off the field, Balogun worked to elevate the Tigers’ team grade point average more than a full point to 3.3 while graduating 100 percent of her student athletes. She also fundraised over $20,000 annually for the program.

Balogun previously served as an assistant coach at Alabama State (2011-13), a graduate assistant coach at Auburn University-Montgomery (2010-11), and an associate coach at Darlington Soccer Academy in Rome, Ga. (2008-10). Her stint at Auburn-Montgomery helped produce a top-25 team national ranking. While at Alabama State, she was appointed the NSCAA Assistant Coach of the Year for the Central Region (2013). The Lady Hornets won their first Eastern Division championship with an undefeated regular season league mark, and advanced to the first conference championship match in school history.

She also worked as an Assistant Athletic Trainer and Assistant Strength & Conditioning Coach at Alabama State. Balogun was one of the founding assistant directors of the Proprioception Endurance Balance Agility (PEBA) strength and conditioning program during her time with Darlington Soccer Academy. She also has experience coaching with the Alabama Olympic Development Program.

She played at Campbell University in Buies Creek, N.C., where she was a four-year starter from 2004-08. A three-time captain with the Camels, Balogun earned multiple second team All-Atlantic Sun Conference honors. She was a member of conference regular season and tournament title teams and played in the NCAA Championships in 2005. She also played for the Hampton Roads Piranhas, a United States W-League team located in Virginia Beach, Va.

She earned a Bachelor of Science degree in Athletic Training from Campbell in 2008, and added a Masters of Education in Sports Management from Auburn University Montgomery in 2012. She was a Dean’s List student throughout her academic career and was named to the Atlantic Sun Conference All-Academic Team.