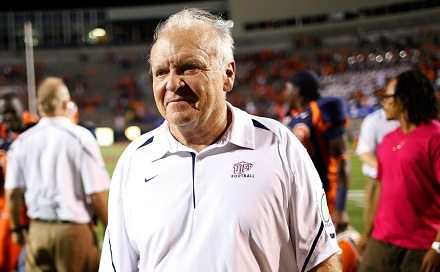 UTEP Director of Athletics Bob Stull announced on Monday that Mike Price will step in as the Miners’ interim head football coach for the remainder of the 2017 season.

Price will take over for Sean Kugler, who stepped down on Sunday.

“I’ve asked Mike if he could help us in this situation,” Stull said.  “He has thankfully agreed.  We’ve lost two coaches, and while we have two fine coordinators who are capable of doing the job, I just felt like it was important to bring in somebody with head coaching experience that is familiar with El Paso and our program.”

“I was surprised and flattered by Bob’s call and appreciate the opportunity to help this program one more time,” Price said.  “I am not interviewing for the future job, and I’m not going to be the future head coach.  I’m going to manage the program and provide leadership for the rest of the year.”

Price will be meeting with the team tomorrow afternoon and will have his first practice with the Miners on Wednesday morning.

This is Price’s second tour of duty with the Miners.  He served as UTEP’s head coach from 2004-12 and took the Miners to three bowl games (2004 Houston, 2005 GMAC, 2010 New Mexico), one of only two coaches in school history to achieve the feat.

Price was finalist for National Coach of the Year in his first year at UTEP in 2004.