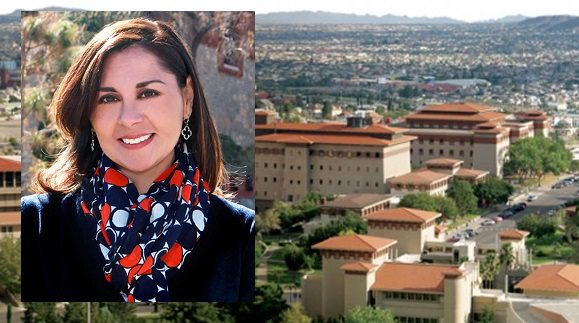 Villalva, whose new appointment commences immediately, has since 2013 been director of UTEP’s Centennial Museum and Chihuahuan Desert Gardens. In addition, in 2014, she served as executive director of the University’s Centennial Celebration.

“Maribel Villalva’s contributions to the University have been extensive and impactful,” said President Natalicio. “We are very pleased to be able to bring her community- building experience to Alumni Relations.”

Villalva received her bachelor’s degree in journalism from UTEP in 1997 and joined the staff at the El Paso Times as an arts reporter covering the border region’s performing and visual arts. She also served as a multimedia reporter for the Times from 2004 to 2008 and was a sports and features writer at the 2004 Summer Olympics in Athens for The University of Texas at El Paso, UTEP President Diana NatalicioGannett News Service, then the parent company of the El Paso Times.

In 2008, Villalva became executive director of the El Paso Holocaust Museum, where she oversaw the museum’s day-to-day operations, fundraising, coordination of local and traveling exhibits, year-round programming, and promotion of the institution and all of its activities.

“As a proud graduate of UTEP, I am thrilled to step into this role at Alumni Relations,” Villalva said. “I welcome the opportunity to engage with UTEP alumni around the world so that they can remain a part of the UTEP community.”

Villalva replaces Richard Daniel, Ph.D., who led UTEP Alumni Relations for nearly 10 years and has accepted a position as the Vice President for Institutional Advancement at Saint Michael’s College in Colchester, Vermont.

Villalva commented, “Dr. Richard Daniel and his team have developed a successful alumni program and I hope to build on this success.”