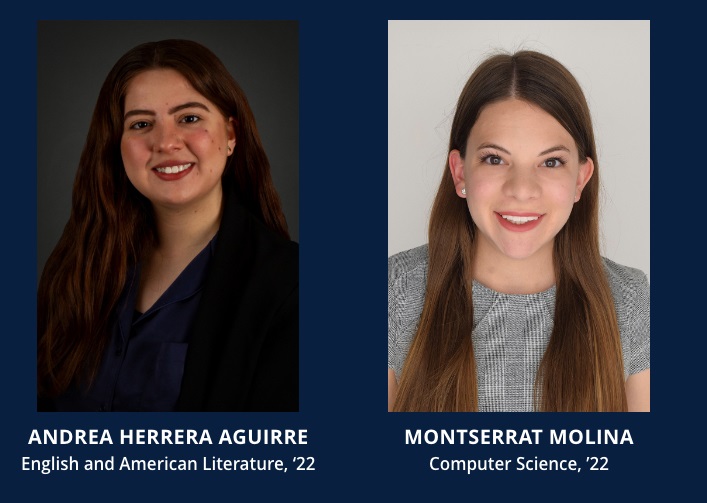 On Wednesday, two University of Texas at El Paso students were named the institution’s first-ever Hawkins Scholars and awarded $10,000 each.

Herrera Aguirre and Molina were among 11 finalists selected for their outstanding intellect, character, service to others, leadership attributes and potential to address important challenges facing humanity.

The chair of the selection committee, Juan Sepulveda, Ph.D., the J.D. Calgaard Distinguished Professor of Practice in Political Science at Trinity University and a Rhodes Scholar, said that the Hawkins Scholarship selection process creates a competitive environment while guiding students through unfamiliar territory and positioning them for success.

“Understanding the rules of the game and how these processes work, helping students get access to that [knowledge], and being able to practice is going to allow our talented students to win,” he said. “It is key that as a University, UTEP is saying ‘We want to help you understand how this works.’”

Herrera Aguirre is an English and American literature major from Ciudad Juárez, Mexico. Herrera Aguirre crossed the bridge from Juárez to El Paso every day to attend Father Yermo Schools for 13 years. She studied English and American literature at El Paso Community College before enrolling at UTEP, where she is a member of the University Honors Program and Sigma Tau Delta, an English honors society. Herrera Aguirre is also involved in student organizations including the Consejo Mexicano para el Cambio Social en UTEP, the French Club, and the UTEP Election Commission. She plans to pursue a master’s in communication and teach at the high school or college level.

Molina is a junior computer science major and English and American literature minor from El Paso. After she graduates, Molina will pursue a master’s in software engineering while continuing to study literature. She is engaged in undergraduate research in computer science and held software engineering internships at Uber the past two summers. Molina is the chief marketing officer of UTEP’s chapter of the Society of Hispanic Professional Engineers, where she previously served as the chair of marketing and communications.

The Hawkins Scholarship application and selection process is modeled after competitive graduate scholarship programs, including the Rhodes, Marshall, Mitchell and Gates Cambridge Scholarship.

“Congratulations to these two outstanding UTEP students,” said UTEP President Heather Wilson. “The Hawkins Scholarship supports exceptional students who are also leaders who will change their communities in the future. The committee sees something special in these young people and it’s a pleasure to help them on their way.”

“By applying for the Hawkins Scholarship, UTEP students learn how to reflect on their personal story and life experiences. Writing a personal statement essay allows students to practice communicating their passions, priorities and goals to a selection committee tasked with identifying future leaders.”

The Hawkins Scholarship was announced at UTEP’s inaugural Honors, Scholars and Fellows Day in February 2020 and garnered interest from dozens of UTEP’s best students.

The Hawkins Scholarship is named for First Lieutenant William Deane Hawkins, who studied engineering at UTEP, then called the Texas College of Mines. He enlisted in the Marine Corps after the attack on Pearl Harbor and was killed in action while serving during World War II. He was posthumously awarded the Medal of Honor for his heroic acts above and beyond the call of duty.

To learn about other scholarship and fellowship opportunities, click here.