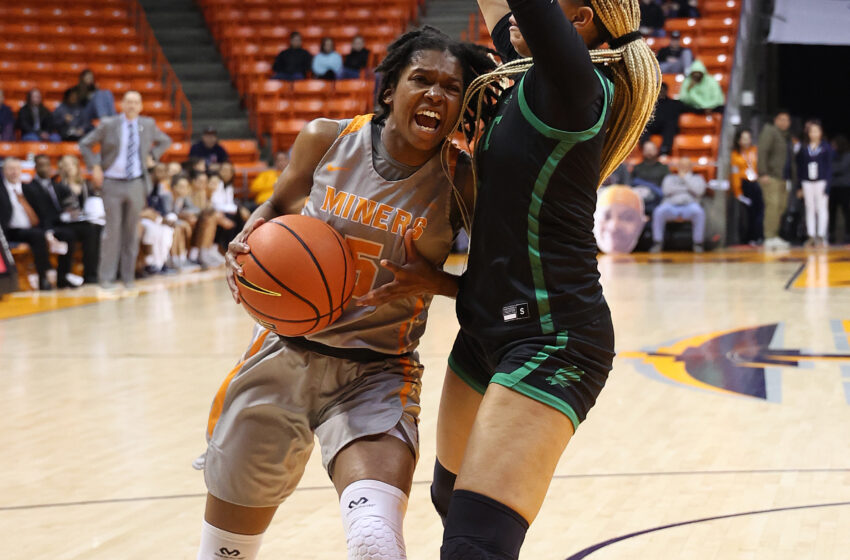 Destiny Thurman scored a career-high 30 points and UTEP led by as many as 21 on the way to a 75-62 win over North Texas on Thursday night in the Don Haskins Center.

Thurman tallied 15 points in each half, going 9-of-17 from the field, 4-of-7 from beyond the perimeter and 8-of-9 from the free throw line to become the first UTEP (13-7, 5-5 Conference USA) player to reach 30 points since Sparkle Taylor scorched the net to the tune of 32 points on March 8, 2017 against Old Dominion in the final game of the Keitha Adams era.

For Thurman, her previous high was 23 earlier this season against North Dakota.

“I hope now finally that Destiny Thurman gets the respect that she deserves in our conference,” UTEP Head Coach Kevin Baker said. “She has been looked over and she’s been passed by. She is probably our best defensive player, and tonight, she was our best everything.”

North Texas battled throughout the first half to stay within striking distance, trailing 35-27 after a layup by Emma Villas Gomis with 1:12 left before the break.

UTEP quickly answered with back-to-back 3-pointers, first by Thurman and then a buzzer-beater before the half from just over the half-court line by Avery Crouse to give the Miners a 41-29 lead.

A 6-0 run by the Mean Green to start the third quarter brought the visitors within six at 41-35.

Once again, the Miners showed their resilience, immediately capitalizing on a pair of Thurman triples towards the end of the shot clock plus seven Erin Wilson points to put together a 15-0 run to stretch the lead all the way out to 21.

“I kind of just knew that the ball needed to go up,” Thurman said. “I was just trying to get to my spot, make sure I had the ball in my hands with the right placement and I just put the shot up, and I knew it was going to go in.”

The lead remained in double figures until North Texas rattled off a 7-0 fourth quarter run to cut the lead to 65-57 with 4:20 remaining, though that would be as close as the visitors would get the rest of the way.

“If you came to the game you saw a great performance, and I am proud of that,” Baker said. “Where we really won this game was Monday, Tuesday and Wednesday. Our players came back and had awesome and upbeat practices after playing horribly on Thursday and Saturday in Florida. They were kind of at a crossroads, and this team decided that they weren’t having it, and Monday, Tuesday and Wednesday were great practices. That is where we won the game.”

In addition to the big night for Thurman, Wilson posted a season-high 15 points to go along with two steals as she made her first start of the season.

Avery Crouse had 14 points on 4-of-5 shooting and Elina Arike contributed eight rebounds.

The Miners and Owls can be heard on the UTEP Miners app with Mando Medina calling the action. The contest will also be covered live on C-USA TV.