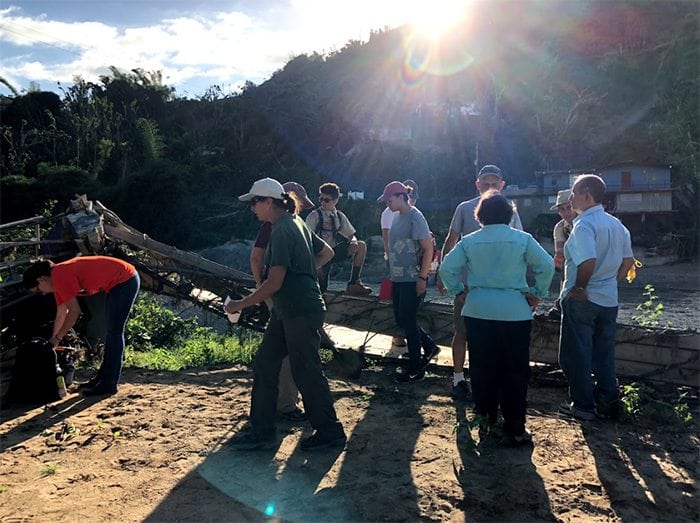 Ivonne Santiago, Ph.D., knows firsthand the difficulties of rebuilding homes and lives in the aftermath of a natural disaster.

The clinical professor in the Department of Civil Engineering at The University of Texas at El Paso was 10 years old when a hurricane ravaged her family’s home in Puerto Rico. As the storm beared down on the island, the house filled with muddy water. All the family could do was wait. When the hurricane finally passed, the family assessed the damage done to their modest concrete home.

As they began the cleanup process, they realized everything was lost, Santiago said.

Those feelings of despair surfaced again in September 2017 as Santiago watched news reports of Hurricane Maria – a Category 4 storm – barrel through Puerto Rico.

“I couldn’t sleep; I was worried about my family and my father who has Alzheimer’s,” Santiago said. “Immediately after the hurricane had passed, I knew it would take a long time to recover.”

She was right. Since then, Maria has been regarded as the worst natural disaster on record in Dominica and Puerto Rico. The storm left the island without electricity and clean water. More than 3 million U.S. citizens were left in the dark and thirsty, including Santiago’s family.

Familiar with the pain Maria has heaped on her home state, Santiago has sought ways to help. She is overseeing Engineers for a Sustainable World (ESW), a UTEP student organization, as it partners with New Mexico State University’s Aggies Without Limits (AWL) in an effort to help rebuild the devastated island.

Upon hearing the island’s citizens didn’t have clean water, Santiago set up a GoFundMe account. Eventually, the donations reached $10,000. With that money, Santiago purchased filters to remove impurities from water to make it potable.

There was just one problem. Santiago was unsure how to deliver the filters to people in Puerto Rico. Luckily, she found two local Boy Scout Troops in need of Eagle Scout projects who were able to distribute the filters in the municipalities of Guayanilla, Mayaguez, Utuado, Orocovis and Ponce. In all, almost 1,000 filters were distributed, but that was only the beginning of the civil engagement Santiago had started.

In January, Santiago saw the devastation for herself during a visit to Puerto Rico. She knew more work was needed in order to help the community.

She was asked to help design and build a suspension bridge that had been washed away in the city of Utuado. She also was approached by a colleague who works for an international nonprofit to provide solar energy to a small town of 23 homes that remains without electricity.

Santiago sought help from her NMSU colleagues Professor Kenny Stevens and Sonya Cooper, Ph.D., academic dean of NMSU’s Department of Engineering Technology and Surveying Engineering. The trio spearheaded the two projects as not solely a relief effort, but also as a chance for a service-learning project with students from both NMSU and UTEP.

For these projects, students worked with licensed engineers and contractors from Puerto Rico, as well as professors from both universities to leave an impact on the region. Together, students from AWL and ESW spent their respective spring breaks gathering equipment and resources, and creating a plan of execution to rebuild the suspension bridge and provide solar energy to the two communities affected by Hurricane Maria in the municipality of Utuado.

One such student is Miguel Fraga, the vice president for ESW and a senior in UTEP’s Engineering Leadership program. Fraga said he is working to gather 20 students from UTEP that will be able to volunteer their time and help facilitate these projects in late May and early June.

“This project will not only benefit students, but it will also help people from Puerto Rico meet their basic human needs,” said Fraga, who is also working on fundraising. “We will be able to provide families on the island with a stress-free life and access to clean water and electricity. This is why I believe in this project. People now more than ever are learning to live without anything when they only had very little to begin with.”