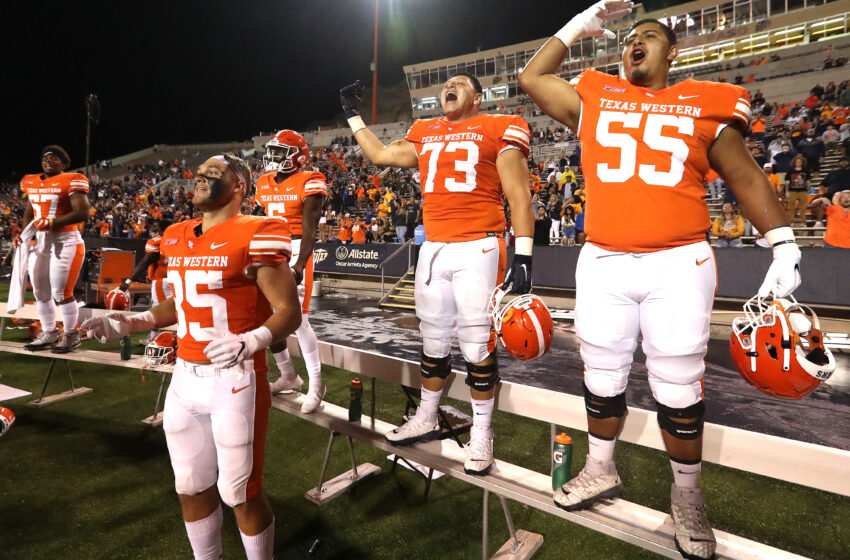 The contest also marks the 89th Homecoming game as the Miners and Monarchs are set to kickoff at 7 p.m. in Sun Bowl Stadium.

The Miners and Monarchs can be heard on KLAQ 95.5 with “The Voice of the Miners” Jon Teicher calling the action, former UTEP quarterback Mike Perez providing color analysis and Mando Medina roaming the sidelines.

The Monarchs and Miners present two of the top defenses in the league, ranking two and three, respectively, in C-USA total defense. UTEP is giving up 317.0 yards per game, while ODU is yielding 315.0 yard per game.

“We have a big conference game coming up, our conference opener against [Old Dominion], a team that’s real well coached and that we’re super familiar with,” UTEP Head Coach Dana Dimel said. “Their head coach was with us at Kansas State, so there’s a lot of familiarity. They run a lot of the Kansas State defensive packages that we’ve seen, but they also put some other wrinkles in as well. It’ll be a good test for us. Their record is not indicative of what kind of football team they are. They’re getting better and improving all the time. It’s obviously going to be a really tough test for us to open conference play at home. [ODU] has a quarterback who makes a lot of plays, he’s very athletic and dynamic. They can score some points on you.”

UTEP is coming off a dramatic come-from-behind victory over New Mexico on Sept. 25. The Miners, down 13-3 going into the locker room at the half, rallied and outscored the Lobos 17-0 in the second half.

UTEP’s defense allowed only 71 total yards in the half. Defensively, Praise Amaewhule registered a sack and a career-high seven QB hurries.

Linebackers Tyrice Knight (12 tackles) and Breon Hayward (10 tackles) led the team in tackles. Dy’vonne Inyang was credited with a career-high seven stops and picked off his first career pass.

Offensively, Jacob Cowing tallied a career-high 174 yards along with a 55-yard touchdown, and Justin Garrett recorded 105 yards in the air. Gavin Hardison threw for 293 yards on 15 completions.

ODU, after falling behind 35-7 at the half against Buffalo, came up short 35-34 on Sept. 25. The Monarchs came within a point after D.J. Mack found Zack Kuntz in the end zone with 19 seconds remaining in the game.

ODU was called for an unsportsmanlike penalty and came up shot on the PAT. Mack Jr. passed for 224 yards and ran for another 84 with a pair of rushing scores.

After winning a gold medal at the Games of the XXXII Olympiad this summer, former UTEP track and field star Emmanuel Korir has returned to El Paso.

Korir will be honored at Saturday’s UTEP-Old Dominion football game and will also be made available to sign autographs at halftime. The autograph session will take place at the UTEP Marketing table, located at the front entrance of the north end of the stadium.

Korir clocked in at 1:45.06 in Tokyo to extend Kenya’s 800m gold streak to four straight Olympics. Korir became just the third Miner and the first since 1984 to win a gold medal in track and field at the Olympics.

He was also the 16thformer UTEP track and field student-athlete to medal at The Games.

The Series with ODU

D.J. Mack Jr. has 130 yards on the ground and leads the way with five rushing scores. He’s passed for 559 yards and three touchdowns. Zack Kuntz leads ODU in receptions (16) and receiving yards (185). Jordan Young paces the defense with 27 tackles, while Amorie Morrison leads with 2.5 sacks.

One of the Top WRs in the Nation

All About That Consistency

WR Jacob Cowing has been Mr. Consistency since arriving on campus in 2019. He has caught a pass 22 straight games, with at least two receptions in the last 16 contests of the streak. Most recently he had a huge game in the win against New Mexico (Sept. 25), grabbing seven passes for a career-high 174 receiving yards. It was the most receiving yards by a Miner since Jordan Leslie had 218 at Tulsa in 2012. The lone time of his UTEP career that Cowing failed to make a catch came in his second appearance, a 38-3 loss at Big 12 power Texas Tech on Sept. 7, 2019.

Garrett’s Got That Too

WR Justin Garrett has been just as reliable for Miner quarterbacks over the past couple of years. He has posted at least two catches in 19 straight contests, a streak that started on Oct. 5, 2019, against UTSA in the Sun Bowl. Most recently he had four catches for 105 yards in the victory against New Mexico (Sept. 25).

Gavin Hardison has averaged 10.3 yards per attempt through four games in 2021, a huge jump from his average of 7.1 in 2020. Hardison ranks first in Conference USA and fifth nationally in yards per pass attempt.

Praise Amaewhule tallied a career-high seven quarterback hurries in UTEP’s 20-13 win against New Mexico. It was the most since Menson Holloway’s eight QB hurries at Nevada on Nov. 4, 2000. Amaewhule added two pass breakups, a strip-sack, 1.5 tackles for loss and four tackles.

Tyson Wilson made his first career start against New Mexico. The sophomore DB made the most of his starting nod as he posted a career-high seven tackles and a career-best two pass breakups.