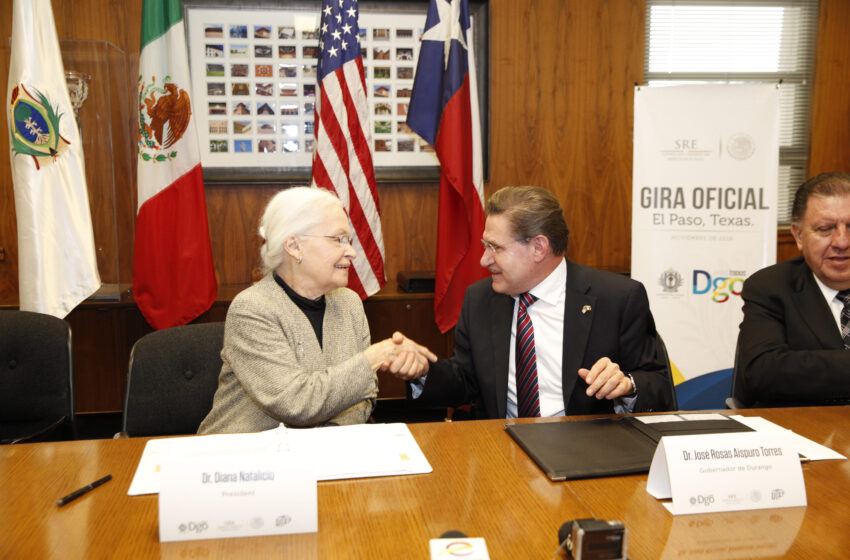 Governor of Durango, Mexico, Jose Rosas Aispuro Torres, Ph.D.; members of his delegation; and Consul General of Mexico in El Paso Marcos Bucio met Nov. 3, 2016 with UTEP President Diana Natalicio to announce Durango’s commitment of scholarship funds and sign a memorandum of understanding (MOU) and collaboration between the government of Durango and UTEP.

Through the agreement, a group of Mexican students who qualify for the Students’ Assistance Program (PASE) will attend UTEP with scholarships supported by Durango’s Department of Education. Undergraduate and graduate students will participate.

Master’s and doctoral students whose areas of study contribute to the development of the State of Durango will be given priority. UTEP, in return, will support the students’ admissions and enrollment process.

“Embodying our location on the U.S.-Mexico border, UTEP is a truly binational institution,” said UTEP President Diana Natalicio. “Creating opportunities for Mexican students has been an integral part of our mission since we opened our doors in 1914, and our commitment to UTEP’s Mexican students has been accompanied by longstanding and multi-faceted relationships with institutions and professional colleagues in Mexico.  We look forward to continuing to build on that tradition.”

“Dr. Natalicio has distinguished herself as a supporter of Mexican students at The University of Texas at El Paso,” Bucio said. “That is something the Mexican government recognizes and respects. Because of that, the Mexican Consulate has facilitated discussions with the state of Durango to develop this agreement that will use government resources to fund students, with the understanding that these students will return to their communities to give back with their professional services.”

There are currently more than two dozen students from Durango enrolled at UTEP, including Master of Business Administration student David Garcia.

Garcia is the third in his family to attend UTEP and founded an organization on campus to help other incoming students from Mexico. He said continuing his education in El Paso was a great decision, and he thinks this new agreement provides a great opportunity for students in Durango.

“Students in Durango have limited options for higher education,” Garcia said. “They can go to Torreon two-and-a-half hours away or Monterrey 16 hours away. These scholarships will now provide students with another option.”

UTEP senior Carla Rosete agrees. She came from Durango to study management and human resources and will graduate with a bachelor’s degree in December.

“I chose UTEP because of all the amazing opportunities that the University offers to international students like me,” Rosete said. “This will open so many doors for students that are interested in having a top education like the one I have received, that without this type of program wouldn’t be possible.”

Durango is 650 miles away from Juárez, Mexico, and will be the second Mexican state to have a scholarship MOU with UTEP.