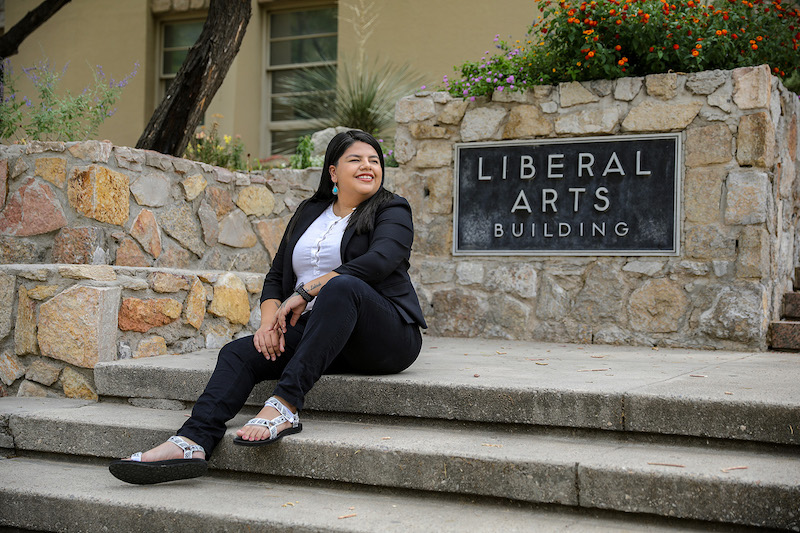 Diana J. Lopez, a doctoral student at The University of Texas at El Paso, was named to the inaugural list of Social Justice Fellows of the Memorial Foundation, the organization behind the construction of the national Martin Luther King Jr. Memorial. Lopez, who completed her first year of borderland history studies, is one of 50 individuals nationwide that the foundation picked to participate in the eight-week fellowship that started July 8, 2021. Photo: J.R. Hernandez / UTEP Communications

The Memorial Foundation, the organization behind the construction of the national Martin Luther King Jr. Memorial, recently announced that Diana J. Lopez, a doctoral student at The University of Texas at El Paso (UTEP), was among its inaugural Social Justice Fellows.

Lopez, who completed her first year of borderland history studies, is one of 50 individuals nationwide that the foundation picked to participate in the eight-week fellowship that started July 8, 2021. Organizers selected participants based on their abilities to inspire others and to embody King’s principles of love, hope, justice and democracy.

The UTEP student, who identifies herself as a queer Chicana, has a long history of activism focused on gender, the border and social justice. She said the foundation’s selection shocked her.

“I feel humbled and honored to be recognized through this (selection),” said Lopez, an El Paso native who grew up in Juárez, Mexico, and Sunland Park, New Mexico. “As a transfronteriza, it is important for me to bring awareness to the injustices that we face in the borderland, while also recognizing the important movements that are working against these issues.”

Harry E. Johnson Sr., president and CEO of the Memorial Foundation, said he was thrilled with the potential of the first class of fellows, and was confident that the program would help this group of young leaders to develop their abilities to inspire.

“With the goal of transforming protest to policy, the challenges of today require a new generation of bold leadership,” Johnson said.

The fellows are obligated to attend a virtual distinguished lecture series, build a presentation around a social justice topic of their choice, and produce a capstone project focused on how to build a movement around a current issue at the local, regional and national level. Those who complete the program will travel to Washington, D.C., for an in-person Congressional component focused on social justice and public policy.

“These subjects are important to me because I work towards developing an understanding of the many challenges that have been placed in my path due to my multiple identities,” she said.

Lopez, a first-generation college student, was a triple-major in Spanish, psychology as well as gender and sexuality studies at New Mexico State University. She earned her master’s degree in Mexican-American Studies from the University of Arizona.

She lauded her UTEP professors for providing her with the necessary tools to understand the root causes of systemic challenges that disproportionately affect border communities, “especially Queer Trans People of Color and Black and Indigenous folks.”

Jeff Shepherd, Ph.D., professor and chair of the UTEP Department of History, called Lopez a hard worker and gifted writer who is dedicated to furthering research and scholarship in borderland studies, particularly where it involves historically marginalized communities.

“One of the things that is especially impressive about Diana is that while she maintains her commitment to academic excellence, she has been a vocal advocate for racial justice and equity for the dispossessed,” Shepherd said.

Lopez expects to earn her doctorate in about four years. After that, she said she would like to join the professoriate at a university along the U.S.-Mexico border to be a role model for future generations of students of color.