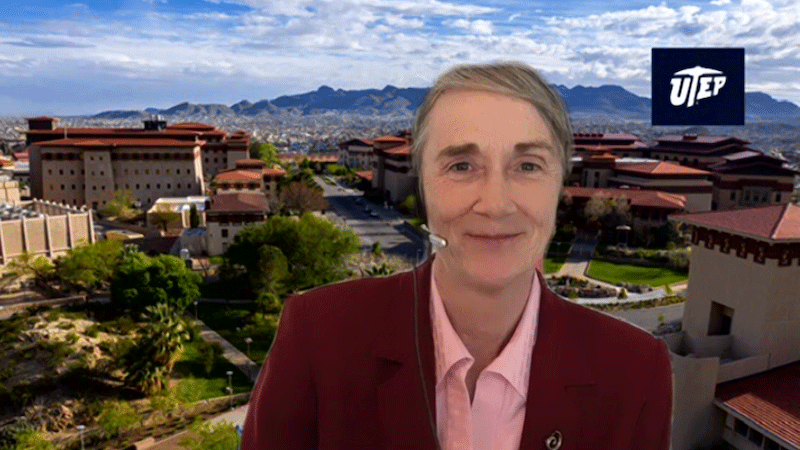 “Too many women and minorities walk in and do not sit at the table,” President Wilson said. “We need to bring them to the table.” | Photo courtesy UTEP

Mentors and “champions” can help elevate more women and minorities to positions of authority, according to The University of Texas at El Paso’s President Heather Wilson, who was a panelist on a virtual Women’s History Month webinar on Tuesday, March 23, 2021.

President Wilson was part of “Celebrating Women Leaders in STEM: Sharing Insights, Experiences and Pathways for the Future,” which was organized by the Association of Public and Land-grant Universities. The panel of female leaders in academia discussed various topics tied to STEM (science, technology, engineering and mathematics) during the 90-minute presentation.

President Wilson was joined by Gail Murphy, Ph.D., vice president for research and innovation and professor of computer science at the University of British Columbia in Vancouver, Canada; Susana Rivera-Mills, Ph.D., provost and executive vice president for academic affairs at Ball State University in Muncie, Indiana; and Sharon Tettegah, Ph.D., director of the Center for Black Studies Research and professor of Black Studies at the University of California, Santa Barbara.

The panelists’ comments ranged from their higher education pathways, to their efforts to promote diversity, the importance of professional relationships and methods to encourage more girls and minorities to consider a future in STEM to enhance higher education for underrepresented students.

Once in the workforce, a less established peer could benefit from positive reinforcement from a mentor who suggests their mentee be considered when an opportunity arises, President Wilson said. That is when mentors need to become champions for their colleagues.

“Too many women and minorities walk in and do not sit at the table,” President Wilson said. “We need to bring them to the table.”

The UTEP leader also made an important distinction in how recruiters should approach girls during their critical middle school and high school years to interest them in pursuing STEM degrees in college. She said research has shown that while teenage boys are satisfied with solving a problem, teenage girls are more interested in why the problem matters. Boys may be interested in robots and things that explode, but girls are more focused on questions such as if they would want their community to have clean drinking water, if they would want to help find a cure for Alzheimer’s disease, or if they would like to help create safer automobiles for families.

“That makes a difference,” said President Wilson, the first in her family to attend college and a member of the third class at the U.S. Air Force Academy to admit women. She earned her master’s and doctoral degrees in international relations as a Rhodes Scholar at Oxford University in England.

Tettegah also suggested that recruiters should take a varied approach to science when they approach younger students. She said STEM could involve recipes for those who may want to enter the culinary arts or the proper balance of ingredients if you want to develop a new kind of makeup.

When asked by the moderator what they would do differently in their academic or professional careers, several of the panelists said they would focus more on relationships.

President Wilson said that as a young professional, she was driven by the work, whether it was a problem that needed to be solved or an organization that needed to be fixed, but in retrospect, she thinks of the people who were with her on those journeys.

“Building relationships of trust all along the way creates a web and weft of professional relationships over time that will continue to lift you up,” she said.

Rivera-Mills agreed with President Wilson and added that there was value in building personal and professional relationships as a support network. She added that she would be less shy as an undergraduate and would ask more questions of her professors.

“If there is something I could tell graduate students and undergraduates, it would be ‘Try to overcome feeling timid,’” Rivera-Mills said. “Knock on those doors, ask those questions and take advantage of those times that you have with those professionals both on campus and off to build those incredible relationships, because they will serve you well in the future.”

Murphy said she also would build more relationships, but added that she would take different kinds courses to explore different disciplines and revel in the opportunity to learn things instead of worrying about the future.

Tettegah said she would reach out to more people, and that is the advice she gives her students. She called it the most important thing they can do because that effort could lead to new and exciting pathways.

“Often when you reach out, they reach back,” she said. “People don’t realize that we’re all willing to help, but you have to reach out.”