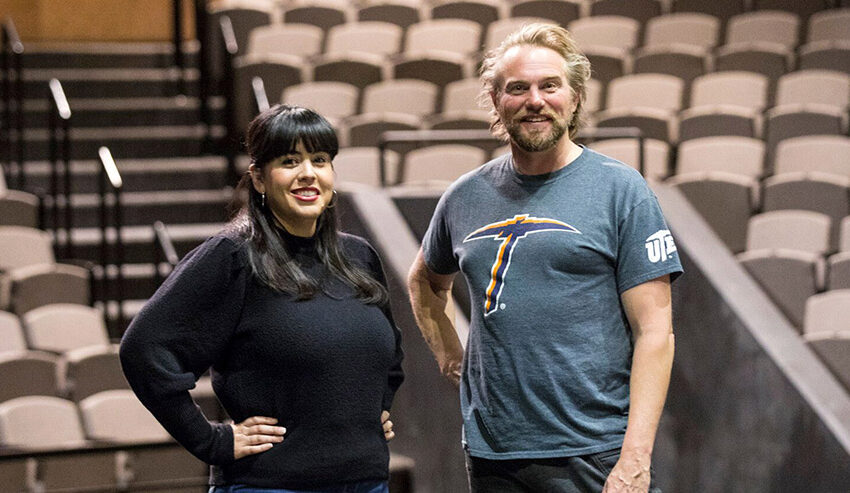 A couple of theater professors from The University of Texas at El Paso have added a regional essence to “A Christmas Carol” and hope their unique adaptation resonates with audiences during its limited run that begins Saturday, December 8, 2018, in UTEP’s William and Marie Wise Family Theater.

“A Christmas Carol en la Frontera” is a re-imagined version of the Charles Dickens novella originally published in December 1843. Jay Stratton and Adriana Dominguez, Ph.D., assistant professors of theater, adapted the story to make it more culturally relevant to a Latino community.

In this version, Ebenezer Scrooge is still a cold-hearted, profit-hungry businessman, but now he lives in a community similar to El Paso in the 1920s. Scrooge has forsaken his Latino heritage, but he rediscovers his roots during the play with the help of three spirits.

The Latinization of the play includes music, language, dance segments, and food and cultural references. Stratton, who is directing the show, said he and Dominguez felt free to play with the script, which is about 30 percent in Spanish, because the story is so recognizable. UTEP’s Department of Theatre and Dance has produced some variation of the holiday classic at UTEP for the past 12 years.

“You may lose a few words, but you don’t lose the themes or the plot,” Stratton said.

Stratton and Dominguez took a break from their other duties to discuss their version of the play, which has been produced on stage since a few weeks after the story was published. The two sat on the lip of the Wise theater stage inside the Fox Fine Arts Center where their production will come to life in a few days. In the background were grayish headstones and building facades that included an overhead bridge. Additional sets were on rollers in the wings.

Both were proud of their border adaptation and they hope that audiences will be pleased with their version, which promises to include a few ghostly chills and other surprises. Decorators already have installed some colorful piñatas in the Wise theater lobby to create a more festive atmosphere.

The pair laughed about how far the production has come from the initial order in early 2018 from department chair Cristina Goletti. She assigned the Dickens project to Stratton with two directives: include dance elements and reinvigorate the story. He initially teamed up with Leanne Rinelli, assistant professor of dance, to modify the story.

After a few tries at tweaking the narrative, Stratton said he and Rinelli realized that the only way to energize the project was to give it a different perspective. They suggested that the story be set on the border. He got Goletti’s blessing but knew that he would need help.

“If you want Norwegian (holiday) traditions from Seattle, Washington, I’m good with that, but I’ve only been (in El Paso) three years,” said Stratton, who joined the UTEP theater faculty in 2015. “I’m still a guest of the culture.”

He immediately reached out to Adriana Dominguez, Ph.D., assistant professor of theater, to help shape the script.

“I thought it was a fantastic idea,” said Dominguez, an El Paso native and longtime UTEP educator who was eager to give the story a border makeover. “I know the expectations are high. For a lot of people, this production kicks off their holidays.”

To the best of their knowledge, no one has attempted this kind of border adaptation for “A Christmas Carol” on this scale. The two worked throughout the summer and had a first draft ready for a read-through in August. They assigned roles to some theater students to test the dialogue. They reached out to scholars on and off campus to ensure their script was grammatically correct and culturally respectful.

Stratton and Dominguez said the feedback helped the border realism and tradition of the script and the scenes. For example, tamales replaced the Christmas goose and it is an undigested bit of barbacoa and not beef that Scrooge suspects for waking him up to meet the first spirit. They also praised those staff and faculty members who helped with the dance, music and costumes, which Dominguez called accurate and enjoyable. They pointed out that the production includes several dance sequences choreographed by Rinelli. The dancers create an eerie atmosphere that becomes more pronounced throughout the show.

“Their help was invaluable,” she said. “Our department is known for producing high-quality work. We wanted to do this project the best way possible.”

Among the 30-member cast is Joseph Fernandez, a junior theater performance major. The El Paso native said he was excited to audition for the lead role of Scrooge, especially because of the new, cultural adaptation.

“It’s always a pleasure to take on an iconic role, but this is a little different” said Fernandez, who has been part of four UTEP productions to include a leading role in last spring’s “In the Next Room.” He was pleased that the play’s message is a classic lesson in humility and of treating others the way you want to be treated. “This one hits close to home because it involves our heritage. It creates a different feeling. It’s like finding out who you are and being proud of it.”

While Stratton and Dominguez expect their production to do well with the community, they also are excited to share it with approximately 2,500 K-12 students from area schools who will attend matinee performances. Stratton is especially interested in their reaction because he may base a research project on the adaptation. He is curious how children will respond to a bilingual theatrical production based on the amounts of English and Spanish in the script.

Goletti, the department chair and associate professor, said she was happy with the adaptation because it energizes the story and makes it more relevant to a U.S.-Mexico audience that is heavily bilingual and bicultural. The adaptation is part of a growing effort by Goletti to provide opportunities for larger discourse of theater and dance on a regional, national and global scale.

“The excitement was palatable this year,” she said in reference to reimagining the holiday classic. “The students were super excited.”

She said “A Christmas Carol en la Frontera” will be part of the department’s 2019-20 theater season that will be focused on Latinx productions. Latinx is the gender-neutral term for Latino and Latina, but in Goletti’s mind, it is a category of American theater along with other ethnic sub-groups.

“We want to provide our audiences with a depth and breadth of what it means to be Hispanic,” Goletti said. “UTEP can be the best Latinx theater department in the U.S. based on curricula and performance schedule, and there is no reason why we shouldn’t be.”

Tickets may be purchased at the University Ticket Center, 915-747-5234, online, or at the Wise Family Theater box office one hour before the performances.