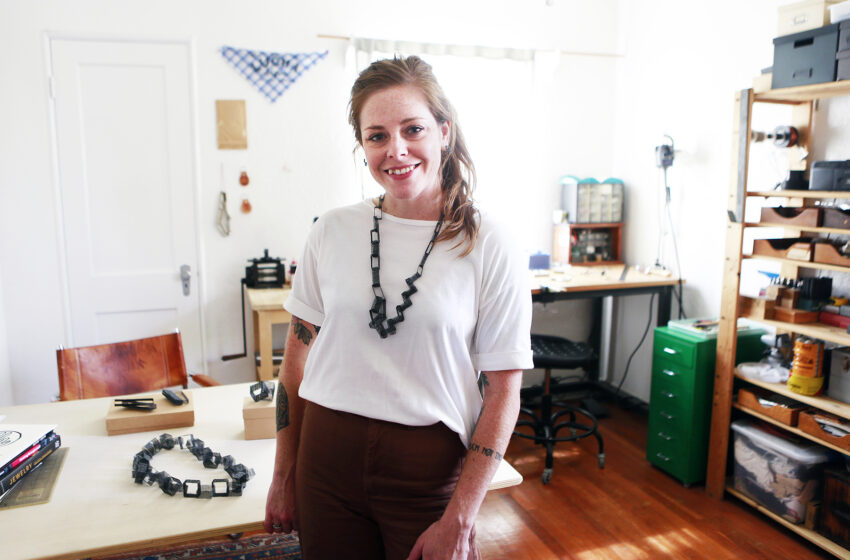 The Loewe Foundation named Jess Tolbert, an assistant professor of art at The University of Texas at El Paso, as one of 30 finalists for an international art prize based on innovation and modern craftsmanship. | Photo courtesy UTEP

An international organization has nominated Jess Tolbert, assistant professor of art at The University of Texas at El Paso, for a prestigious award that recognizes artists who achieve creative excellence by combining craft with contemporary culture.

The Madrid, Spain-based Loewe Foundation announced the 30 finalists for its fourth Craft Prize in spring 2020. The award celebrates innovation in modern craftsmanship and recognizes artists whose talent and vision set new standards. Organizers decided earlier this year to postpone the award ceremony until spring 2021 in Paris due to the COVID-19 pandemic.

Tolbert, head of UTEP’s jewelry and metals program, said this award is highly competitive and that her selection as a finalist is an honor on its own.

The competition began with almost 3,000 submissions from 107 countries across six continents. The final 30 are a diverse lot from 18 countries who are at different stages of their careers. The nominees represent different countries, cultures and creative disciplines, but share a willingness to reinvigorate traditional materials.

“I am among an amazing roster of artists, some of whom I have looked up to since my days as a student,” said Tolbert, who started at UTEP as a visiting assistant professor in 2015. “To be a finalist, and to possibly receive this award, means great visibility for myself as an artist and the work I do. My research and recognition bring attention to the department and University as a whole. As a mentor and role model, I hope this ultimately inspires students toward what is possible with their own art making.”

Artist in the Making

Tolbert was born in Fort Collins, Colorado, but her family moved around when she was young. She had lived in seven cities from coast to coast by the time the family settled in Houston where she attended high school.

She said that she grew up around musicians, artists and people who worked with their hands. Her ability to sew and crochet led to her first creative outlets. She started to dance in high school and joined the drill team, which was another opportunity for self-expression.

Tolbert was a graduate student when she decided to pursue the professoriate. She said she wanted to share her skills and knowledge with students and be around others who loved to talk about art.

“This field changed my life in so many positive ways, and understanding that making art has such a profound impact has inspired me to do the same for others,” she said.

Students and colleagues expressed their pride in and support for Tolbert and praised her as a teacher and mentor of the next generation of artists.

David Griffin, chair and professor in the Department of Art, said Tolbert has enhanced the department’s metalsmithing and jewelry program to levels not seen in years. He said she sets goals and achieves them.

“To be nominated and recognized for the caliber of her work at this point in her career among these international artists provides strong evidence that Jessica is becoming a very strong voice in the field of contemporary metalsmithing and jewelry design,” Griffin said.

Vincent Burke, associate professor of art and head of ceramics at UTEP, said that for Tolbert, a young thirtysomething, to earn this kind of respect so early in her career is a testament to her talent and skills.

“This is an incredible recognition of her status as an important person in her field on a worldwide stage,” he said. “I’m proud of her and happy for her.”

Gabriela Alvarado Marquez, a senior studio art major, praised Tolbert as a teacher, an artist and as a boss. She has had Tolbert for six classes and has served as her teaching assistant since fall 2019.

The Mexico City native called Tolbert’s art “mind blowing.” She praised her as a role model who takes chances with her art and is not afraid of failure. Alvarado, who plans to graduate in spring 2021, said that Tolbert works equally hard to get students to make the most of their talents.

One of Tolbert’s frequent collaborators is Kerianne Quick, assistant professor of jewelry and metalsmithing at San Diego State University. She met Tolbert when both were graduate students at Illinois. They bonded quickly through a similar work ethic. Both entered the professoriate and sought opportunities to collaborate to include trips abroad to present their work and enhance their scholarship.

As for the Craft Prize, Quick said the competition often gravitates toward pieces that are beautiful, elegant and have a minimalist design. Tolbert’s entry in the competition is a square-shaped metal brooch approximately 4 inches by 4 inches by ¾ of an inch thick, from her “Greater-Than” series. It had a simple but complex woven construction of steel and fused steel staples. Quick said Loewe’s jurors probably responded to Tolbert’s submission because it pushed the boundaries of what is expected from jewelry.

“Jess’ work is simple, but it is reached through a complex methodology,” Quick said. “She makes pared down and essential design decisions that result in objects that have a certain intellectual complexity that I really admire.”

Anatxu Zabalbeascoa, executive secretary of the Loewe’s Foundation Craft Prize’s Experts Panel and president of the jury, said Tolbert’s piece demonstrated an artist’s openness to use unexpected materials and the skills to deal with them. She praised Tolbert for how she transformed “humble upcycled staples” into a wearable piece of art.

“All our chosen finalists were rethinking traditional techniques and displaying a brave willingness to experiment,” Zabalbeascoa said. “We saw that in Professor Tolbert’s brooch.”

The Loewe’s representative said nominated works often are simple, but technically sophisticated. She praised the finalists for their skills, creativity, artistic ambition and the willingness to update tradition.

Tolbert, who would be the first educator to win the competition, said she was grateful to the art community for its support and encouragement, especially from her UTEP colleagues and students.

“They truly inspire me every day, motivate me to keep going, and make it fun and interesting along the way,” Tolbert said.