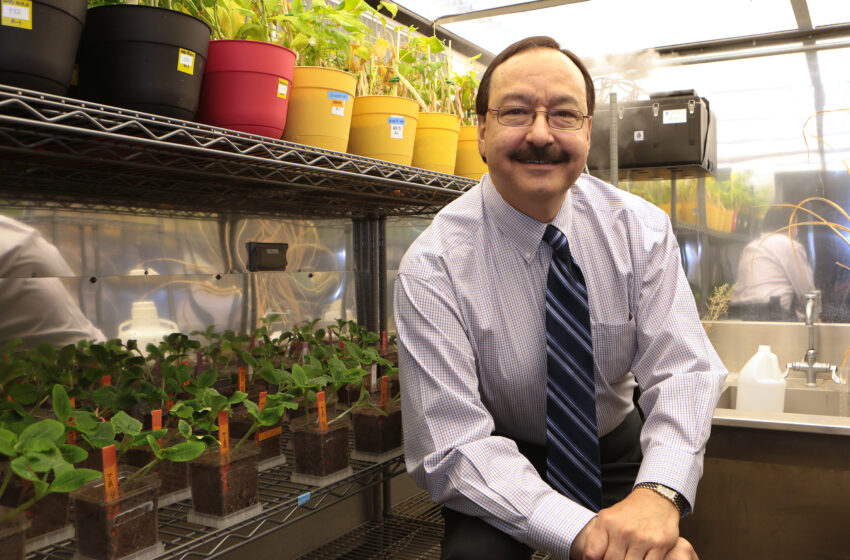 Great Minds in STEM (Science, Technology, Engineering and Math) today announced its 2017 Class of HENAAC Award Winners. UTEP’s Jorge Gardea-Torresdey, Ph.D., Dudley Professor of Environmental Science and Engineering, professor of chemistry and chair of the Department of Chemistry, was selected in the education category.

“Dr. Gardea-Torresdey is an extraordinarily accomplished educator, mentor and researcher,” said UTEP President Diana Natalicio. “This prestigious national award celebrates his 25-year commitment to guiding our UTEP students toward exciting futures in STEM fields, where their success enhances UTEP’s reputation as a major contributor to a high-quality and diverse workforce.”

The organization created the education award to honor individuals involved in higher education across the U.S. Nominees are typically educators, administrators or distinguished professors who demonstrate a strong commitment to promoting STEM education. Gardea-Torresdey was selected from a long list of national nominees.

In his UTEP career, Gardea-Torresdey has mentored 33 Ph.D. students (26 in environmental science and engineering, six in chemistry and one in materials science), and 29 students have received their master’s degrees under his mentorship. He has mentored more than 39 undergraduate students in research.

He also helped establish two (environmental science and engineering, and chemistry) Ph.D. programs at the University.

Great Minds in STEM is a nonprofit organization dedicated to keeping America technologically strong by promoting STEM careers. Established in 1989 and based in the Los Angeles area, the organization’s nationwide programming focuses on STEM educational awareness from kindergarten through college, and on seeking out and documenting the world-class contributions of Hispanic professionals in STEM to serve as role models for the next generation of American engineers and scientists.

“I am very happy that my efforts to produce the future generation of environmental scientists and engineers and Ph.D. chemists is being recognized with this award,” Gardea-Torresdey said. “I am extremely proud that many of our first-generation Hispanic students are now professors at esteemed universities or work for national government agencies like the EPA.”

Gardea-Torresdey has authored more than 420 publications and holds five U.S. patents for environmental remediation. In 2016, he received the first Graduate Mentor Award in UTEP history. His research achievements are highlighted in the Lawrence Hall of Science of the University of California, Berkeley. Other accolades include the 2009 SACNAS Distinguished Scientist of the Year Award and the 2012 Piper Professor Award, which is one of the most prestigious honors conferred to a professor in the State of Texas.

He will be honored at the 29th Annual HENAAC Conference in Pasadena, California, Oct. 18-22, 2017. A full list of winners is available online.