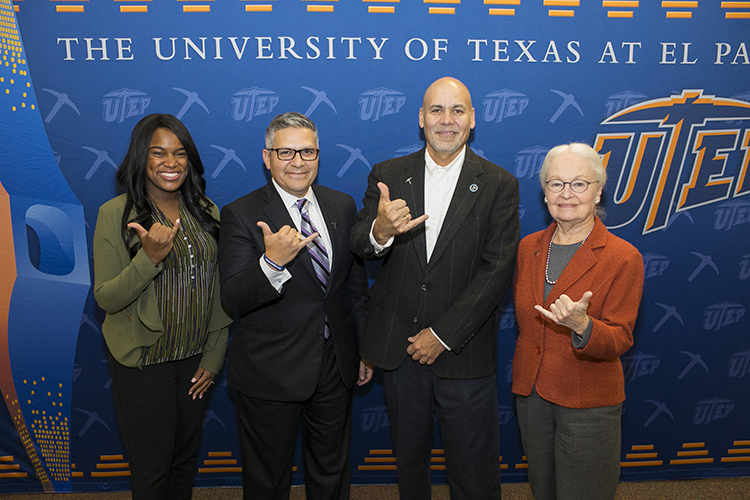 Roger Gonzalez, Ph.D., finds inspiration in supporting others. The professor and chair of the Department of Engineering Education and Leadership at The University of Texas at El Paso abides by that notion not only through teaching but enhancing the lives of individuals who have lost limbs.

Gonzalez, a UTEP alumnus, is the founder of LIMBS International, a nonprofit that designs, donates and supplements affordable and functional prosthetic limbs to developing countries throughout the world.

TIAA, a financial services firm that serves millions of people across the academic, research, cultural, medical, government and nonprofit fields, recognized Gonzalez’s work in November 2018 by naming him a TIAA Difference Maker 100 honoree.

In 2013, Gonzalez’s organization partnered with prosthetists in developing nations to develop a full-leg system called the LIMBox, which provides a complete set of components rather than individually sourced parts. The LIMBox now reaches an average of 400 amputees a year worldwide. In 2014, his team began to address issues beyond the physical needs through community-based rehabilitation (CBR) programs, which are geared toward enhancing the quality of life for people with disabilities and their families. There are now seven CBR programs throughout Latin America that provide patients with physical therapy, counseling and social re-integration.

TIAA is marking its centennial year by recognizing 100 individuals, who, like Gonzalez, work for a nonprofit and make significant contributions in their community or the world. TIAA awarded Gonzalez $10,000 to support and advance the work of LIMBS International.

“We serve those who serve others, and as you think about what that means, it’s a powerful statement,” TIAA Managing Director Chris Chavez said. “When we launched the Difference Maker 100 initiative, we were looking for people who, like Dr. Gonzalez, choose to serve others because they believe in what they are doing, in the people whose lives their work is impacting and in the people they’re engaging along the way.”

Gonzalez returned to UTEP as a faculty member in 2012. Since then, LIMBS International has set up its headquarters in El Paso and has developed a partnership with the University. This collaboration has expanded LIMBS and given UTEP students the opportunity to conduct research and design prosthetics that help hundreds of people worldwide. Student involvement is another aspect of Gonzalez’s work that TIAA sought to recognize with the Difference Maker 100 award.

“When somebody in a teaching role like that is able to impact the lives of others through his work, it creates the foundation for his students to take their ideas down a similar path,” Chavez said. “It’s the seed that will one day become a tree that expands out to find other areas where those students can possibly make their impact.”

Though he appreciates the recognition, Gonzalez believes LIMBS International has a lot more work to do.

“The need is far from met,” he said. “There is much to do and so few of us doing this, that while overwhelming, we are inviting others to join our efforts. I have been given much, and my desire still is to give back from all that has been given to me. As it is said, ‘For of those to whom much is given, much is required.’”

The podcast “Crazy Good Turns” featured the story of Gonzalez and his work with LIMBS International in November 2018. The podcast, created by former Home Depot CEO Frank Blake, celebrates people who serve others.

The hope is that it will inspire them and others to pursue additional good works. Forbes, Huffington Post, and Oprah Magazine have featured the podcast in stories.