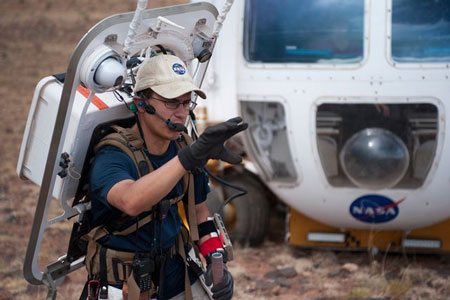 UTEP Professor of Geological Sciences Jose Hurtado, Ph.D., has made it to the semifinal round of the selection process for NASA’s astronaut corps.

“This is exciting for me since it has been my aspiration, for as long as I can remember, to be an astronaut and fly in space and to serve my country as an explorer,” Hurtado said.

“To have a chance to see that dream come into fruition is very gratifying. For UTEP, I hope my success in this process serves as an inspiration to others, particularly the young people and students of our community, and as a way to show UTEP as a place of excellence and possibility,” he added.

This is the third time Hurtado has achieved this milestone; he did so before in 2012 and 2008. Next steps for him include interviews at NASA Johnson Space Center in September.

“There are plenty of lessons I’ve learned from my previous two interviews that I will bring to bear this time, plus a lot of personal and professional development I’ve done since my previous interview, so in some ways I think this might be my best chance yet,” Jurtado added.

Click here to read ‘Space Miners: The Pass of the North Becomes a Passage to the Stars