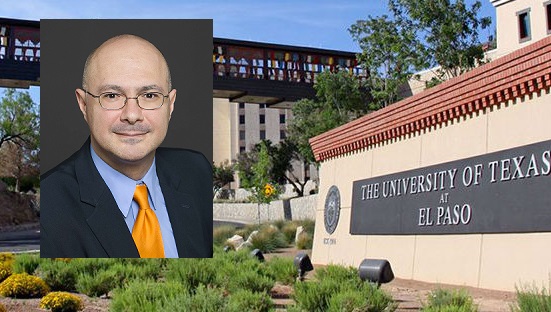 He is one of only two UT System faculty members selected this year to join this distinguished group of educators. The new members will be inducted at a ceremony in April in Austin.

Established in 2012, the Academy of Distinguished Teachers recognizes outstanding educators from across the UT System academic institutions. It serves as the system-level advisory and advocacy group dedicated to fostering classroom innovation, promoting interdisciplinary educational perspectives, and catalyzing the sharing of best practices in undergraduate learning across campuses in the UT System.

“Dr. Francia is an exceptionally committed mentor and an engaging teacher whose contributions make him an outstanding representative of our UTEP faculty,” said John Wiebe, Ph.D., acting provost and vice president for academic affairs at UTEP. “I am pleased that his record is being acknowledged by his peers across the System.”

For Francia, the announcement marks the second high-profile honor from the UT System in less than a year. In August 2018, Francia was recognized along with Irma Montelongo, Ph.D., associate professor of practice/online coordinator for Chicano/a Studies, as a recipient of the UT System Board of Regents’ Outstanding Teaching Awards.

Receipt of this teaching award is a prerequisite for induction into the UT System Academy of Distinguished Teachers. Members of the academy are nominated by a campus-based selection process and are then submitted by the institution’s president or provost for consideration.

“This is a testament to UTEP collegiality,” Francia said. “I was helped by four amazing UTEP professors — Kristin Gosselink (Ph.D., former associate dean in the College of Science), Beth Brunk-Chavez (Ph.D., dean of Extended University), Juan Noveron (Ph.D., associate professor in the Department of Chemistry and Biochemistry), and Jeffrey Olimpo (Ph.D., assistant professor of biological sciences). They inspired me, as did my graduate and undergraduate students. This recognition for teaching excellence follows UTEP’s R1 designation in the Carnegie Classification – and both celebrate UTEP’s tremendous commitment to education.”

Francia grew up in Mozambique and Swaziland in southeastern Africa. He earned his bachelor’s degree in biochemistry from the University of Bristol and his doctorate in biology from Cancer Research UK, formerly known as Imperial Cancer Research Fund, in London, England.

He worked in cancer research at the University of Toronto, Canada, before taking his first teaching job at UTEP in 2012.