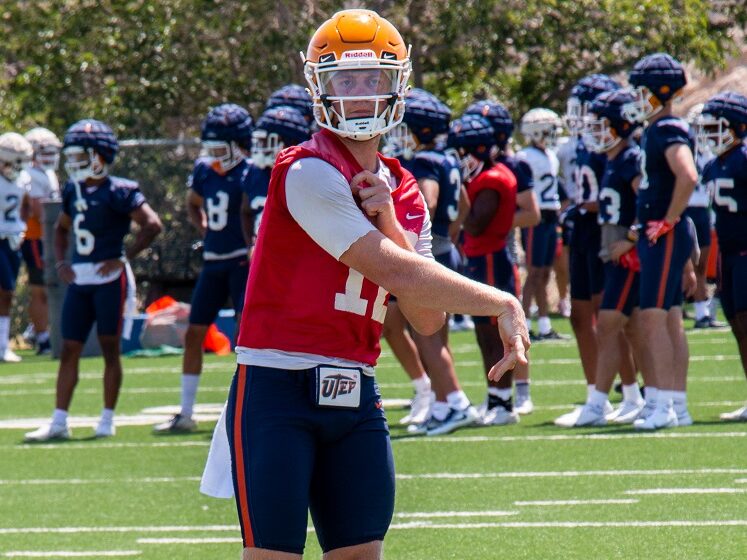 With just 18 days until the 2021 season kicks off, the UTEP Miners are poised to enter the fresh campaign with a healthy combination of starting experience and unfamiliarity at the quarterback position.

UTEP entered fall camp with six quarterbacks on the roster, three of which have been in the program since 2019 in Gavin Hardison (R-So.), Calvin Brownholtz (R-So.) and Isaiah Bravo (Sr.). The new faces to the group include Kevin Hurley (So.), JaKolby Longino (Fr.) and Zach Rodriguez (Fr.).

The trio of veterans returning has allowed the Miner offense to gel and hone in on one of the key words head coach Dana Dimel is using for the team this fall – consistency.

“I think practice has been really good so far,” Hardison, who served as UTEP’s starting quarterback last season, said. “I’m really close with Calvin and Isaiah since we’ve all been here a while. We’re really trying to bring up Kevin, Jakolby and Zach in this offense, and it has been going pretty well so far. I’m just working to improve on every aspect of my game, so it’s not really one specific thing.”

Hardison started seven games for the Miners in 2020, while going 108-of-199 passing for 1,419 yards and five touchdowns. The sophomore quarterback averaged 202.7 yards per game in his first season as the starter.

A native of Carmichael, California, Brownholtz echoed Hardison’s sentiments on the quarterbacks’ preparation for the season and the comradery in meeting rooms.

“The first week of practice has gone pretty well and everyone seems to improve a little bit every day,” he said following Tuesday’s session. “I am out here competing with Gavin and we are pushing each other. Our quarterback room is pretty healthy and the coaches seem happy with what we are doing. It’s been a really healthy environment in meeting rooms and we continue to encourage each other.”

Brownholtz saw action in all eight games for the Miners last season in a dual-threat role, while he also started the season finale versus North Texas at quarterback. Brownholtz had 27 rushing attempts for 114 yards and three rushing touchdowns, while he was 18-of-37 passing for 255 yards and two touchdowns through the air.

Senior Isaiah Bravo also saw action in UTEP’s road contest at Texas last season to gain valuable game experience, while the addition of Hurley, Longino and Rodriguez has added plenty of depth to the quarterback room for the Miners.

UTEP returns a total of 10 starters on offense in 2021, including Hardison, who eclipsed 200 passing yards in four of the seven games he started at quarterback last season.

The 2021 UTEP Football season opens on Saturday, August 28 with the “Battle of I-10” versus NM State in Las Cruces. Kickoff is set for 7:30 p.m. MT at Aggie Memorial Stadium.

The home opener versus Bethune-Cookman is scheduled for Saturday, September 4 at the Sun Bowl and will kick off at 7 p.m. MT.

The Miners return to Glory Field at 9 a.m. on Wednesday for the 12th practice of fall camp before enjoying a day off on Thursday.

Season tickets and multiple ticket packages are on sale for the 2021 UTEP Football season. Season ticket prices start as low as $65 and flexible payment plans are available.