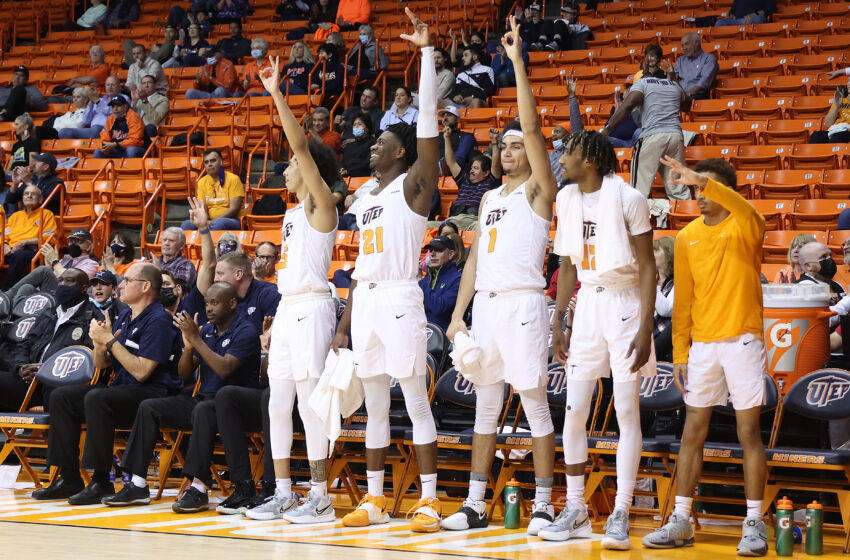 NORFOLK, Va. – Souley Boum poured in 28 points (13 in overtime) to go along with a career-best six steals, Jamal Bieniemy added 14 points (game-tying three with 14 seconds in regulation), and UTEP rallied from seven down in the final minute before outlasting Old Dominion, 78-70, in OT in an exhilarating road victory Saturday evening.

It marks the first league road win in a year, and the initial triumph at Old Dominion since 2015.

The Miners frustrated the Monarchs most of the night, but still trailed by seven (63-56) with 1:17 remaining. UTEP stayed calm, however. It got a free throw from Tydus Verhoeven (nine points, five rebounds) before a trey from Jamari Sibley (11 points, five boards. After ODU misfired at the charity stripe, Bieniemy nailed an NBA-range trey to tie the game and send it to overtime.

Boum then took over as the Miners dominated the extra period. UTEP had only four turnovers in 45 minutes of action. ODU was paced by Austin Trice (19 points, 20 rebounds).

“I thought we were the tougher team tonight, and when you are things go your way,” UTEP head coach Joe Golding said “Credit to JB (Jamal Bieniemy for making the big shot. We finished it (the game) with a stop, and I’m just proud of our effort and fight.

“These guys keep doing the right things, and they deserve it,” Golding said. “Tonight, we were tough. We showed some grit, some physicality and toughness. This (type of win) is what I love. Our guys were gritty tonight.”

The Miners nailed 40.9 percent from the floor while holding the Monarchs to a readout of 31.5 percent. The home side tried to made up for that by going 35-47 at the charity stripe, but the Orange and Blue refused to let that affect their mojo.

Keonte Kennedy (13.3 ppg-third on team, 5.9 rpg-leads squad and 2.1 steals per contest-paces team) and Christian Agnew (5.7 ppg-fourth on team, 3.1 rpg-fifth on squad) were once again sidelined, but UTEP stuck together to get the big win. The Miners have now played just six games this season (out of 17 total) with their top-three scorers (Boum, Bieniemy and Kennedy) all in the lineup together.

Alfred Hollins added all eight points for the Miner reserves. There were eight lead changes and 11 ties in a game that featured huge scoring swings, particularly late.

UTEP got on the board first with a dunk for Verhoeven off a nice feed into the post by Bieniemy before a free throw for ODU. Sibley drained a baseline jumper to make it 4-1 2:30 into the affair. The Monarchs’ first field goal came nearly four minutes in, allowing the Orange and Blue to be up by one (4-3) at the first media timeout.

Boum came up with a steal and score in transition off goaltending but ODU countered with a bucket immediately to keep it a one-point game (6-5, 14:25 1H). The Orange and Blue’s defense continued to frustrate the Monarchs, forcing them to a scoreless stretch of more than three minutes and a 4-22 start from the floor. Bieniemy then splashed home a lay-up and a steal (Saterfield) and a score (Boum) extended the Miner margin to 10-5 with 10:03 to play in the half.

After four consecutive points by the home side, Verhoeven used a nifty drop step for another post score but ODU took advantage of getting to the line early and often to grab its initial lead (13-12, 7:21 1H). It was short lived after a driving lay-up from Boum, with the dime from Bieniemy.

UTEP eventually went back up by four (19-15,  5:34 1H) before four straight by ODU tied the tilt. Bieniemy then drained his second triple of the half but three more free throws tied the tilt at 22 (3:01 1H). There were four points apiece from each side, and the tilt was tied up (26-26) through 20 minutes of action. ODU was 7-23 from the floor in the stanza, but compensated with that by going 12-16 at the charity stripe.

The Monarchs got a dunk to start the second half, but Sibley answered with a score in the paint. Boum then put UTEP back ahead with a pair of free throws before another score at the line by ODU cut the margin to one (32-31, 17:46 2H). Jorell Saterfield (eight points, career-high seven rebounds) then came up with an offensive rebound and putback. After UTEP forced a turnover, the Ranger College product buried an open trey to send the Miners to their then largest lead of the affair (37-31, 15:59 2H) at the time.

Two more free throws were countered by a field goal by Hollins, reinstating a six-point cushion (39-33). After ODU had another free throw, a drive by Hollins through traffic put the Miners up by seven (41-34, 13:58). The Monarchs went back to the line for two more free throws, but Boum nailed an open two on the ensuing possession (43-36, 12:40, 2H).

A long trey from ODU was followed by two more free throws for the Monarchs to trim the Miner lead to two (43-41, 11:44 2H). It was tied up at 47 before Saterfield’s second corner triple broke the deadlock.

After two misses at the line by ODU, Bieniemy buried a trey with the shooter’s touch. UTEP then got another stop before a Boum free throw. He then came up with a steal and score and ODU called timeout as the Miners’ advantage swelled to eight (56-48, 6:45 2H). The Monarchs struck back with 15 straight points before to make it 63-56 (1:06 2H).

UTEP refused to go away, getting stops the rest of the way. The Miners got the free throw from Verhoeven and triples by Sibley and Bieniemy to force OT. Boum and company took care of business in the extra time to hand ODU its first league loss of the season.

UTEP will look to build on the win when it returns home to play host to UTSA in its “Noche Latina” night at 7 p.m. MT on Thursday (Jan. 20). There will be Folklorico Dancers, a Mariachi Band, $6 Margaritas and $6 Tacos. Additionally, the Orange and Blue will don their ‘Mineros’ jerseys.

Jon Teicher (41st year) and Steve Yellen (19th year) will also be on the call, which can be followed on 600 ESPN El Paso, the UTEP Miners App and C-USATV. For tickets, fans may call the Eisenberg Family Ticket Office at (915) 747-UTEP, email tickets@utep.edu, visit www.UTEPMiners.com/tickets or in person (Brumbelow Building on UTEP campus, 201 Glory Road).