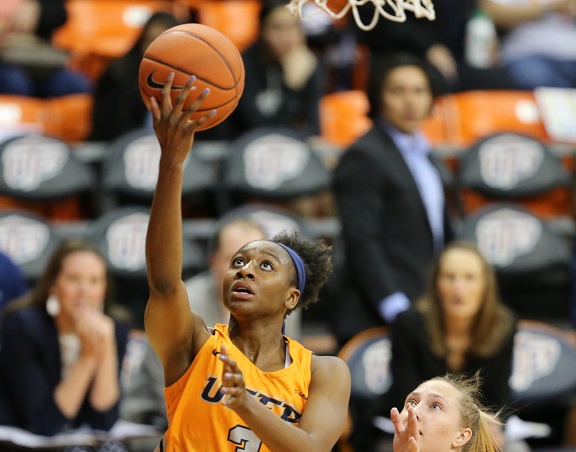 Jordan Alexander tallied a season-high tying 18 points to pace a trio of players in double figures as the UTEP women’s basketball team used a big fourth quarter to rally past UTSA, 77-73, at the Don Haskins Center Saturday afternoon.

The win officially locks up a bid to the 2019 Conference USA Championships (March 13-17) while also snapping a mini two-game skid.

“I really like the way that we’re playing right now,” UTEP head coach Kevin Baker said. “The bottom line for today is that our team is tired of losing closing games. They just decided that today they were going to walk away with a victory. They deserved it.”

UTEP scored the first 12 points in the final frame to take its first lead since 2-1, and it answered every push the rest of the way to secure the come-from-behind victory. It is the first win of the season for the Miners when trailing at the half (now 1-16).

Zuzanna Puc (15 points) and Katarina Zec (12 points) also reached double figures in scoring for UTEP, which dressed only seven players for the eighth consecutive contest. The Miners shot 48.3 percent (29-60) from the floor while committing 13 turnovers. They also took care of business at the free-throw line by nailing 72.2 percent (13-18), including a perfect 8-8 in the final frame to help ice the contest.

All seven Miners scored at least seven points in the game, while Jade Rochelle (eight rebounds) led the efforts on the glass. UTEP registered its highest scoring fourth quarter (28 points) of the season.

UTSA hit 46.7 percent (28-60) of its shots and had a slight edge in rebounding (35-33), but it wasn’t able to slow down UTEP’s balanced attack. Marie Benson (23 points, 11 rebounds) and Kourtney Kekec (11 points, 10 assists) both recorded double-doubles to set the tone for the visitors.

It was back-and-forth over the first few minutes of the contest, with an Alexander triple bringing UTEP within one (10-9) with 6:29 to play in the quarter. UTSA struck back in the form of a 9-0 run over the next two minutes to suddenly put the home side down by 10 (19-9) with 4:02 left in the frame. The differential eventually swelled to as many as 13 (28-15) before UTEP used an old-fashioned 3-point play by Zec to trim the deficit to 10 (28-18) through 10 minutes of action.

UTEP tightened things up considerably defensively in the second quarter, pitching a shutout over the first five minutes of the frame. At the other end of the court a triple by Alexander and a lay-up from Puc helped the Miners claw within five (28-23) with 5:18 left in the half. It was back-and-forth the rest of the way, with UTEP trailing by six (38-32) heading into the locker room.

The visitors had a small push out of the gates in the second half, which allowed them to stretch the lead to nine (42-33). It was at seven (53-46) with 30 seconds remaining in the frame, but UTEP would keep things in striking distance thanks to a clutch trey by Alexander on its final possession of the third quarter.

The comeback picked up steam in fourth quarter with 12 straight points over the first three-and-a-half minutes suddenly propelling the Orange and Blue ahead by eight (61-53, 6:39 4Q). UTSA finally stopped the run with a basket from Tija Hawkins, but UTEP pushed the differential back to eight on a couple of occasions. The Roadrunners chipped away and got within two points three different times in the final two minutes, but the aforementioned clutch free throw shooting helped the Miners complete the comeback.

UTEP will be idle for a week before traveling to play at UAB at 1 p.m. MT/2 p.m. CT on March 2. It will be the final regular-season road game of the season for the Miners, who will be looking to avenge a 76-48 setback against the Blazers in the Don Haskins Center on Jan. 17. The game will be broadcast locally on 600 ESPN El Paso with Duke Keith on the call.