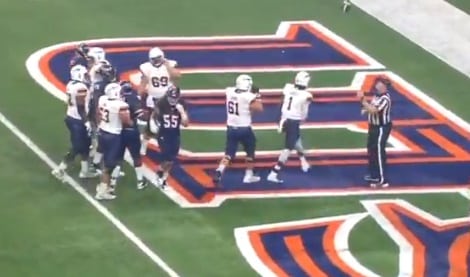 SAN ANTONIO – UTSA built a big halftime lead, then held off a fierce UTEP second-half rally and topped the Miners, 30-21, in the Conference USA opener for both teams on Saturday night at the Alamodome.

Jared Sackett kicked three field goals for UTSA, including a 51-yarder at the end of the first half and a 47-yarder with 35 seconds to go that put it away.  He accounted for all six of the Roadrunners’ points in the second half, when they were outscored 14-6.

The Miners scored two touchdowns in the second half, but couldn’t come all the way back from a 24-7 deficit.

The game got off to a promising start as the Miners recovered a fumbled punt return by the Roadrunners near midfield, took advantage and took their first lead of 2018. Kai Locksley’s three-yard rushing TD made it 7-0.

UTEP forced another UTSA punt on the next drive and had momentum. But Terry Juniel muffed the punt return and the Roadrunners’ Andrew Martel recovered the fumble at the Miner seven yard-line. One play later, UTSA tied the game on a touchdown run by Cordale Grundy.

The Roadrunners took advantage of excellent field position once again, as they began their first drive of the second quarter in Miner territory. They moved 48 yards on seven plays and Grundy connected with Carter McCarthy for a nine-yard score, making it 14-7.

Shortly after, Clayton Johnson picked off Locksley deep in UTEP territory and returned it to the Miner 20. The Roadrunners capitalized with a 15-yard TD pass from Grundy to Tykee Ogle-Kellogg for a 21-7 lead.

The Roadrunners tacked on a 51-yard field goal by Sackett at the end of the half.

The Roadrunners scored 14 points off UTEP turnovers in the first half. Of UTSA’s eight first-half drives, three started in UTEP territory and two others began near midfield.

“That six-minute span right there was disappointing for our football team, the turnover on the punt and then the interception, those two right there back-to-back,” UTEP coach Dana Dimel said.  “I liked the way we came out of the locker room and played well.  I felt like we had the game where we wanted it.  Those unforced errors, we talk about that all the time. Those two were gigantic, we gave the ball to them inside the 20 twice.”

The Miners got back into it with a couple of impressive second-half touchdown drives. Locksley’s six-yard TD pass to David Lucero completed a seven-play, 71-yard drive and made it 24-14 with 5:26 remaining in the third quarter.  Quardraiz Wadley’s three-yard punch into the end zone concluded a 10-play, 69-yard drive and inched UTEP closer at 24-21 with 13:08 left in the game.

Sackett’s 39-yard field goal with 9:49 to go gave the Roadrunners a little breathing room at 27-21. The Miners had a couple of opportunities to take the lead but the UTSA defense stiffened, forcing a punt and an errant fourth-down pass by Ryan Metz, who was in for the injured Locksley.

UTEP has allowed less than 300 yards in back-to-back games versus FBS opponents for the first time since 2010.

“What I talked to the team about in the locker room is how good a job the defense did in the second half,” Dimel said.  “They got two short fields there in the first half, then in the second half they gave up three points besides the field goal there at the end.

“If we control the ball better and eliminate those turnovers, it’s a different ball game. But that’s part of it … a recurring theme is taking care of the football better.”

Next week’s game will feature a 30th anniversary reunion of the 1988 Miners, the winningest team in school history. Fans are encouraged to arrive early for the chance to receive one of a limited number of commemorative 1988 replica jerseys. Gates will open at 4 p.m. For tickets, call (915) 747-5234 or visit Ticketmaster.