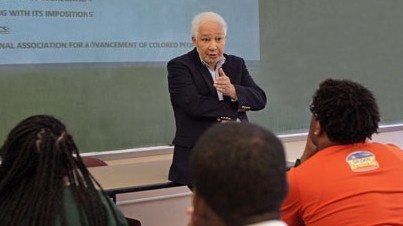 Director of African-American Studies and Associate Professor of History Maceo C. Dailey, Ph.D., died Oct. 11 in his hometown of Baltimore, Maryland. He was 72.

“This was such profoundly sad news,” said UTEP President Diana Natalicio. “Maceo Dailey was a highly esteemed member of both the UTEP family and the El Paso community. So intellectually engaged, knowledgeable and wise, he made every conversation memorable. So unassuming, kind and generous, he was admired and loved by a broad range of students and colleagues across our campus and people across this community. His passing represents a huge loss to all of us.”

Shortly after arriving at UTEP in 1996, Dailey founded the University’s African-American Studies Program and acted as its first chair.

“Dr. Dailey was an extraordinary mentor, teacher and leader,” said Dean of the College of Liberal Arts Patricia D. Witherspoon, Ph.D. “When we discussed a possible new program or project, his opinion was always clear, cogent and stated with both conviction and compassion. He had the gift of bringing diverse people together to talk about important issues of the day and do so in a civil manner. He was a role model for civility, for compassion, for articulate communication among all of our students. The College of Liberal Arts is saddened at the loss of a truly great man. Now it is up to us to honor him by celebrating his life and his work in ways that will help our students for years to come.”

Dailey was a widely respected scholar asked to speak at events and institutions around the country. He received many awards for his work, including being honored as a Man of Distinction by the El Paso Alumnae Chapter of the Delta Sigma Theta Sorority in 1999.

Through their company Sweet Earth Flying Press, which they established in 2003 to publish books by women and people of color, Dailey and his wife, Sondra, brought to light “Boy of the Border,” a forgotten manuscript by Harlem Renaissance legends Langston Hughes and Arna Bontemps. The children’s book told the story of a 12-year-old boy coming of age during the Mexican Revolution.

In El Paso, Dailey was chair of the board of directors of the McCall Neighborhood Center and a board member of the Child Crisis Center, El Paso Symphony, Burnham Charter School, and the advisory committee of the Texas Book Festival.

“He worked very hard every day to make UTEP the best place for each of his students,” said Selfa A. Chew, Ph.D., who serves as interim director of African-American Studies. “They brought great plans to him, because they were confident he would support them all the way, as he did. He kept his door open for all visitors, greeting them and making us feel we were royalty. He helped us dream we had a place in academia and labored with us to achieve it. Even when his vision of the world did not match ours, he encouraged us with great passion to fight injustice, building bridges across diverse communities, never losing his great sense of humor.”

Information about memorial events will be posted when available.