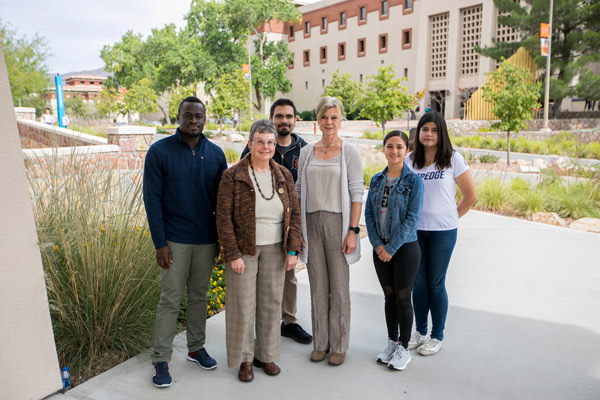 Whether it is due to chipped paint on 40-year-old windowsills or lead-glazed ceramic cookware, millions of children in the United States each year are at risk for lead exposure, usually in their own homes, according to the Centers for Disease Control and Prevention.

Nearly 500,000 children ages 1-5 have blood-lead levels higher than 5 micrograms per deciliter, the level at which the CDC recommends public health actions be initiated. Previous studies suggest these levels can lead to behavior and learning problems, hyperactivity and anemia.

“Early chronic low-level lead exposure is undermining the short- and long-term health of hundreds of thousands of children in the U.S. every year,” said Christina Sobin, Ph.D., professor in the Department of Public Health Sciences at The University of Texas at El Paso. “There’s even data now to suggest that the growing rates of dementia could be linked to exactly these types of early chronic low-level contaminant exposure.”

Sobin has studied early childhood lead exposure in El Paso for more than 10 years. Her research has shown that 14 percent of children in Downtown neighborhoods had elevated levels of lead in their blood. She also found that 50 percent of Downtown children had sub-elevated blood lead levels, which her studies have shown significantly change how the brain and kidneys develop.

“This is a huge child public health problem, and many, many more people need to be working on this problem,” she said.

That is why Sobin has assembled a team of interdisciplinary researchers to work on a project to prevent and respond to elevated blood lead levels in children by educating their caregivers on identifying and mitigating lead hazards in their homes.

The U.S. Department of Housing and Urban Development (HUD) funded the project in October. UTEP is one of only seven universities and public health organizations nationwide that received a grant from HUD’s Lead and Healthy Homes Technical Studies Grant Program to improve methods for identifying and controlling residential health risks, including lead-based paint, mold, secondhand tobacco smoke, and other indoor contaminants.

Researchers will test children for lead in their blood who live in ZIP codes at high risk for lead exposure. They will motivate and assist families to identify and mitigate potential sources of lead in their homes.

Their goal is to eventually develop a strategy to efficiently identify clusters of children who are at greatest risk of lead exposure in El Paso neighborhoods and to reduce that risk through community engagement and education.

“We think we may have an approach that could work in El Paso and maybe in other cities as well,” Sobin said.

According to the CDC, lead-based paint and lead contaminated dust are the most hazardous sources of lead for children.

Contributing to some of the risk are homes built before 1978 when lead-based paints were used in housing. Lead-based paint becomes a concern when it chips, turns into dust, or gets into the soil.

Other potential sources of lead include drinking water that has been contaminated from lead pipes and water systems that have become corroded.

When Flint, Michigan, changed its water source from Detroit to the Flint River in 2014, tests showed that blood-lead levels in five percent of children had nearly doubled after the switch.

Two years later, a Reuters investigation revealed that 3,000 cities in the United States had lead levels twice as high as in Flint.

“It’s not a problem that has gone away because we have this legacy of lead paint in the homes,” said Campbell, associate professor of public health sciences. “We also have the legacy from all those emissions from leaded gasoline that got deposited in the soil, especially near highways and busy roadways.”

Although no amount of lead exposure is safe for children, the CDC recommends taking action on children who have elevated blood-lead levels above 5 micrograms per deciliter, or mcg/dL.

But Campbell said the key is to prevent children from getting lead into their bodies.

“Unless the level is really high, there’s no magic medicine that we can give to take the lead out of the body,” Campbell explained. “Chelation medicine can be given if blood lead levels are 45 mcg/dL or higher, but it’s only taking the lead out that is in the bloodstream and not the lead stored in the bones.”

Campbell was the principal investigator on a HUD lead technical studies grant when she was the medical director of the lead clinic at the Children’s Hospital of Philadelphia in 2005. She also served on and chaired the CDC’s advisory committee on childhood lead poisoning prevention.

“There’s not much that can be done except prevent further exposure,” Campbell said. “That’s why primary prevention is so important to keep children from getting exposed in the first place.”