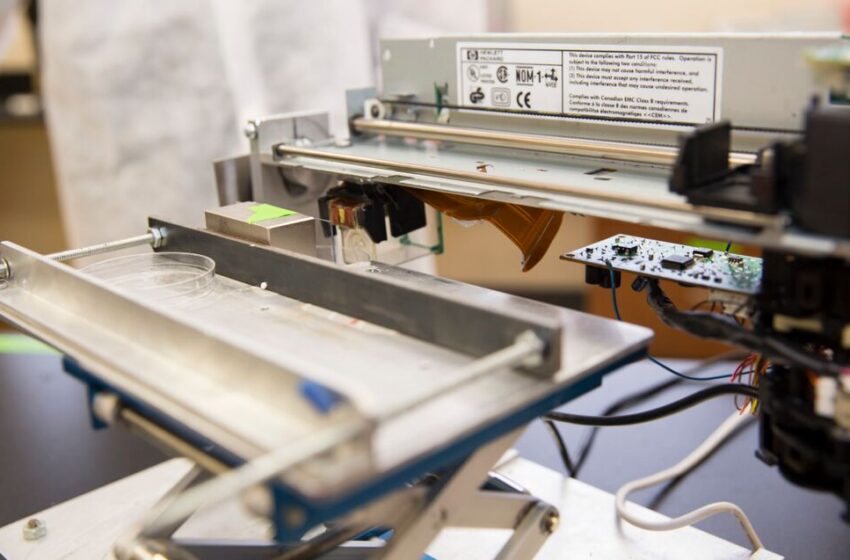 University of El Paso researchers have patented a low-cost device that can easily monitor the health of HIV patients living in low-resource settings.

The portable, battery-powered device works by helping clinicians count the number of CD4 cells, cells that are attacked by HIV, in the body by using magnetic microscale beads that latch on to CD4 cells in the blood and an inkjet printer that’s been modified to print out cells instead of ink.

He has received numerous awards and was featured on CNN and the Discovery Channel for his groundbreaking innovations using inkjet printers to assemble cells and biomaterials into viable and functioning structures.

Patients with HIV are encouraged to participate in regular checkups to keep track of their health. These health assessments are made with blood tests that take several days to complete.

In high resource settings, devices known as flow cytometers complete the tests by analyzing the blood. Flow cytometers, however, are bulky machines that run on electricity — a luxury that’s not available to everyone. The machines also cost upwards of $50,000.

“Flow cytometers are not practical for areas with limited resources like Africa or Mexico,” said Thomas Boland, Ph.D., a professor of metallurgical, materials and biomedical engineering at UTEP who created a less expensive, battery-powered health monitoring tool for use in third world countries.

Here’s how the device works: after drawing a patient’s blood, clinicians mix in magnetic microscale beads that latch on to CD4 cells in the blood. The mixture is then placed in an inkjet printer that’s been modified to print out cells instead of ink.

Rather than printing vertically onto a sheet of paper, the cells are shot out horizontally onto a magnetized microscopic slide. CD4 cells in the blood automatically attach to the slide, while other cells that do not need to be counted dribble down into an excess container.

Doctors can then look at the slide through a microscope to count the number of CD4 cells on it. That number is inserted into an equation that calculates the total number of CD4 cells in the individual’s body. The procedure takes as little as 20 minutes, resulting in ultra-quick results.

Boland hopes his new printer will help doctors and patients in low-resource settings who don’t have access to flow cytometers.

“There’s just not enough infrastructure in some places to get these important lab tests done,” he explained. “Our device can bridge that gap cheaply and quickly. HIV patients can be in and out of the doctor’s office in no time for a diagnosis or check-up.”

The next step in the process is to license the technology to a company that’s willing to help get it on the market. Several doctors in Mexico have already expressed interest in the device, Boland said.