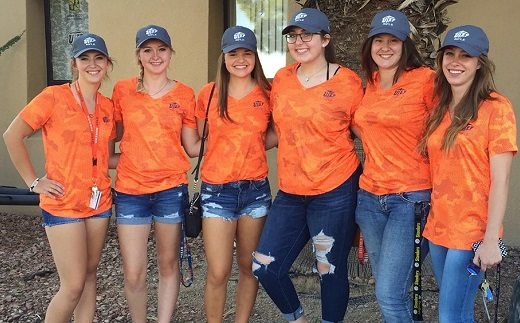 The UTEP Rifle team kicks off action in the 2017-2018 season Saturday against Nevada. The match will be held at the UTEP Rifle Range located inside the Military Science Building.

“It’s been a while since UTEP has had a season-opener at home, so we are very excited to start the season here on our home range as we host Nevada on Saturday,” head coach Hannah Muegge said. “The team is highly motivated and ready to work their way up the rankings this season.

Four of the eight shooters from the 2016-2017 season will be returning this year, along with two talented newcomers (Jessica Boyce, Samantha Miller). The Miners welcome back junior Maranda Nelson, and sophomores Abby Monique, Bailey Powell and Mara Rouse.

With a new team culture in place, the youthful Miners look to set their sights on putting UTEP back on the map.

Nelson, who set a personal best in smallbore (567), air rifle (580) and aggregate (1147) versus Air Force/ Nevada, looks to continue her success and help the team improve. She shot a 579 in air rifle at Ohio State and recorded a 574 in air rifle at the Patriot Rifle Championships on Feb. 5.

“This season is full of potential,” Nelson said. “We have a motivated, tight-knit group that is aiming to constantly improve and climb up the competitive ladder. This season is going to be explosive.”

Powell, who set a school record (597) for the Miners in air rifle, looks to return even stronger this season and lead the team. As a freshman she paced the squad with the best air rifle average (588), and topped 590 in five separate matches last season.

Nevada will open its season at UTEP. The Wolf Packs’ co-ed team finished with a combined aggregate (4639) last season versus UTEP (4616) during the NCAA Qualifier on Feb. 18.

The match will begin with smallbore at 9 a.m. and air rifle will kick off at 11:30 a.m. The contest is free and live stats will be available on UTEPAthletics.com.