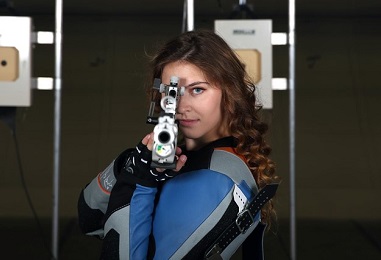 The UTEP rifle team will play host to Nevada on Saturday (8:30 a.m. MT). Admission to the match is free, which will be held at the UTEP rifle range.

“We are real excited about Nevada coming to our range,” UTEP head coach Austin Litherland said. “For this match our mission in practice was to build mental stamina. We have been doing mental drills at practice to build that stamina in a match. The team has pushed themselves so that they can compete in a rifle mental marathon.”

The Miners enter the match on the heels of firing a season-high 4594 to defeat the Wolf Pack (4589) as part of a tri-angular match at Air Force on Oct. 13. Aiding in that victory was a campaign-best 2324 in air rifle.

Sophomore Jessica Boyce paces the Orange and Blue in averages for smallbore (569), air rifle (584) and aggregate (1153). Junior Mara Rouse ranks second on the squad across the board, checking in with averages of 565 in smallbore, 579 for air rifle and 1144 in aggregate. Helping those figures was a campaign-best 584 in air rifle last time out at Air Force on Oct. 14.

Senior Maranda Nelson has produced an aggregate average of 1139 in 2018-19. She notched a career-high aggregate (1161) in the tri-angular match with Air Force and Nevada on Oct. 13. Freshman Morgahn Warner also is coming on strong, having registered a career best in both air rifle (579) and aggregate (1144) on Oct. 13. Overall on the year she has recorded an average aggregate of 1135.

Sophomore Samantha Miller enters this weekend with an average aggregate of 1129. She has eclipsed 570 in air rifle in back-to-back matches for the first time this year, including a campaign-high 577 at Air Force on Oct. 14. Freshman Josephine John competed exclusively in air rifle the past two matches. Overall on the year, she sports an aggregate average of 1124.

For individuals unable to make it out to the range, live stats are available online.