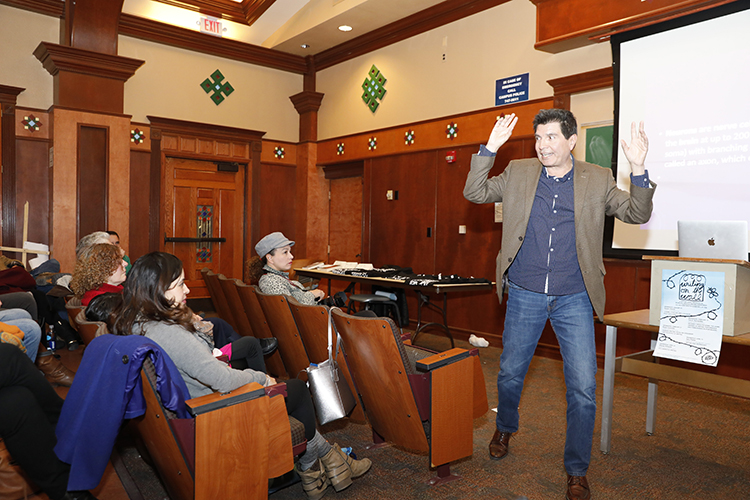 There are many examples of communication gaps in the world. A source of these rifts is the words that speakers and writers choose to use, whether in the political, social or academic arenas.

That was a discussion that two faculty members from The University of Texas at El Paso’s Department of Creative Writing had during the summer of 2018. Daniel Chacón, chair and professor, and Paula Cucurella, Ph.D, lecturer, tried to think of ways to use language to engage the community and build bridges between disciplines, starting within their College of Liberal Arts.

Their brainstorming led to the Writing on the Wall Lecture Series, which launched in January 2019. The title playfully jabs at the current contentious political issue of the proposed wall between the United States and Mexico. Chacón and Cucurella see their “wall” as a metaphor for the proverbial ivory tower where academics write and study about things that do not matter to the general population.

They said they hoped that this semester-long series would disprove that premise. They see these lectures as an opportunity for people who care about words and all kinds of writing to gather, learn and share. The speakers during this “pilot” season will offer interdisciplinary topics that are practical and tied to border life. The sessions, which are free and open to the public, will express how writing enriches everyone’s lives.

“What we do (at UTEP) does have social impact,” said Chacón, whose department is the series sponsor. “I think this will be an important part of the discourse for everyone who writes.”

Hernandez described his presentation as a performance offered as a lecture. He said he planned to demonstrate how someone could cross various genres to tell a story. He added that he might use audio or visual elements as he hopped from prose to poetry to storytelling

“The presentation will be engaging, and hopefully, entertaining as well as informative,” Hernandez said.

Cucurella, the lead organizer, and Chacón said they gave few directions to the series’ speakers, who all share a passion for writing. Faculty members from the departments of Communication and Languages and Linguistics will give the last two lectures. The first three speakers are from the creative writing department.

“We hope to start a dialogue that will show there are more things that bring us together, and there are more ways than one to tackle a problem,” Cucurella said.

Chacón led the first session, “A Rabbi, A Wiccan, and a Physicist Walk Into a Bar …” on Jan. 23, 2019. A supportive crowd of faculty, staff, students and community members listened to Chacón talk about religion, mysticism and physics. He augmented his presentation with PowerPoint slides.

The professor spent part of his “anti-lecture” talking about the 100 billion neurons, or nerve cells, in our brains that send out electric charges to transmit information. While experts claim these charges control memory, the UTEP professor said they also trigger feelings tied to those memories. In some ways, the concept was similar to the premise of “Inside Out,” the 2015 Disney Pixar animated film.

He set his cellphone timer to ring every 10 minutes or so because his research showed that audiences lose interest without frequent breaks. He used those periods to tell family-friendly jokes that he found on the internet. Among those in attendance were UTEP graduates Carolynne Ayoub and Sarah Huizar.

Ayoub, a retired elementary school and special education teacher, earned a bachelor’s degree in creative writing from UTEP in 2014. She said she spends part of her life as a volunteer with an agency that assists children with disabilities and their families. One of the things that she has learned through her volunteerism and advocacy for those with disabilities is that while there are many agencies in El Paso that want to help, they do not communicate with each other as well as they could. That is why the Writing on the Wall concept resonated with her.

She said she has written creative and scholarly pieces through the years and she knows there is a place for both.

“This is a great opportunity for people who like to share ideas and understand the importance of listening,” said Ayoub, who admitted to enjoying the play on words of the series title. “Walls imply divisions and personal boundaries. This (series) gives us a chance to understand ourselves and others.”

Huizar, who earned her bachelor’s degree in graphic design in 2018, is a first-year creative writing graduate student. She said she sees a lot of opportunity for interdisciplinary collaboration as a staff member in the Undergraduate Learning Center’s Makerspace Lab. She sees representatives from the arts and sciences developing projects.

She called the lecture series a step in the right direction because she has seen her share of “us” and “them,” which is unproductive.

“More ‘we’ is essential for humanity to prosper,” said Huizer, who added that there is room for scholarly and creative writing. “There always will be divisions, but at least we can strive to connect as humans regardless of our academic, religious, political and cultural backgrounds. We’re talking open-mindedness.”

Chacón and Cucurella said that several of their peers, including a number from outside their college, have told them that they are interested in the Writing on the Wall concept and would like to participate at some point.

The organizers said they hope to continue the series in future semesters and broaden its scope to involve UTEP faculty from other schools and colleges, other institutions of higher education such as El Paso Community College and universities in Juárez, and writers from the region.

“We’ve come to realize that there is a need and desire for this discussion,” Cucurella said.