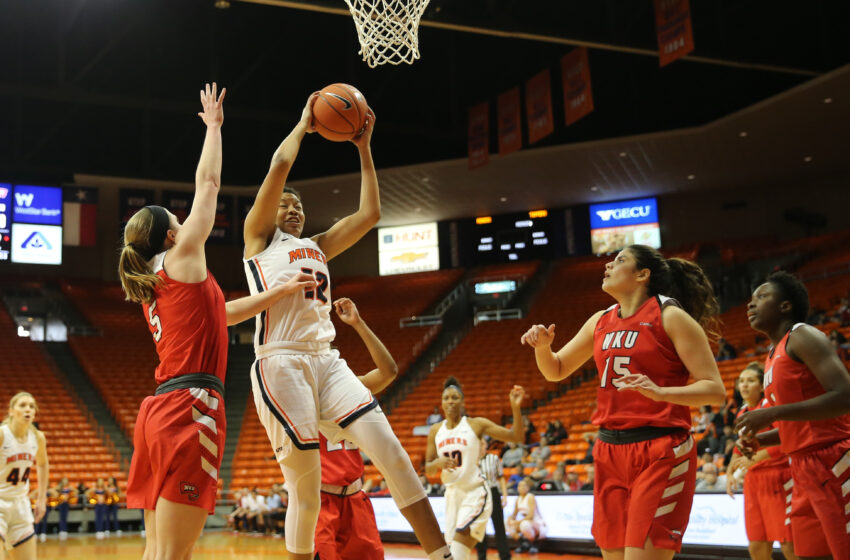 There will be free admission to the game as part of the celebration for National Girls and Women in Sports Day.

“UTSA has been playing well lately and is coming off an amazing come-from-behind victory over Louisiana Tech. They will look to build on that win and attempt to get in to the Conference Tournament. We will need a strong home crowd on Saturday to help us get over the top in this game as we look to gain momentum going in to our tournament,” Head Coach Kevin Baker said.

This is the second meeting on the year between the programs, with UTEP posting a 73-60 victory at UTSA in the Conference USA opener for both squads (Jan. 5). The Miners are 2-11 on the season at home (0-6 in C-USA action). Seven of the home losses have been by four points or less, including a trio of one-point defeats.

With a win UTEP all but assures itself a spot for the tournament, as it would be a combined 4-0 on the year against FAU, FIU and UTSA. A setback, however, would make the waters a bit murkier.

The Miners own the tiebreaker with both FAU and FIU and are 1-0 on the year against UTSA. A victory against the Roadrunners all but assures the Miners one of the 12 coveted spots in the C-USA Championships (March 13-17).

Saturday’s game will be available on ESPN+ with Colin Deaver and Izabela McCage on the call. It will also be broadcast locally on 600 El Paso with Duke Keith and Traci Miller describing the action.

Lipe and Jenkins are not expected back this season while Hoy’s return is unknown.

The Roadrunners have a 10-7 advantage in El Paso and have emerged victorious in three of their past four visits to the Don Haskins Center. The series dates to the 1980’s when both squads were members of the Oil Country Athletic Conference.

Sophomore Alexa Hoy poured in a career-high 22 points off the bench to pace a trio of Miners in double figures as UTEP toppled UTSA, 73-60, on the road in the Conference USA opener for both squads inside the Convocation Center on Jan. 5. The first true road victory of the year for the Miners moves them to 11-3 all time in C-USA lidlifters.

The Roadrunners didn’t make it easy by bolting to a 10-point (22-12) lead early in the second quarter, but behind Hoy’s 12 points in the frame UTEP pulled even (30-30) at half. The Miners were up by two (49-47) before using a huge fourth quarter (24-13) to post the double-digit victory. Jordan Alexander (season-high 18 points) and Zuzanna Puc (15 points) joined Hoy in double figures for scoring while freshmen Ariana Taylor (eight points) and Sabine Lipe (seven points) also got after it.

UTEP crushed the Roadrunners, the top offensive-rebounding team in the league, on the boards (45-28), with Alexander snagging 11 rebounds to post her second double-double this season.

But the story of the day was Hoy, who put on a show in front of her mom, aunt and grandmother. She nailed 7-12 from the floor, including 2-5 from distance. She also made 6-7 free throws, including 5-6 in the final frame, to help ice the contest.