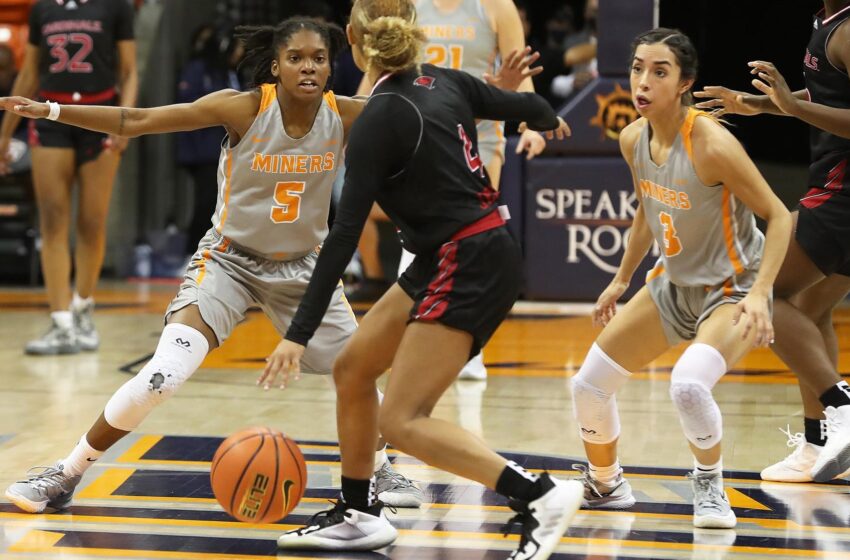 LAS VEGAS – The UTEP women’s basketball team used a huge fourth quarter (18-11) to defeat Seattle U, 62-57, and remain undefeated (5-0) on the season after its first game at the South Point Thanksgiving Shootout Friday evening.

Destiny Thurman led the way with 16 points (10 in first quarter), while Eliana Cabral and Teal Battle joined her in double figures with 12 points.

“I love the toughness and resolve of this team,” UTEP head coach Kevin Baker said. “We didn’t play well and shot the ball horribly. But they just kept fighting. We out rebounded them and got steals. Finally we hit shots in the fourth quarter to pull away. I am so proud of their fight tonight.”

UTEP forced 22 turnovers, including 13 in the opening frame while also controlling the boards to the tune of 39-27. UTEP had almost as many offensive rebounds (19) as defensive (20). The result was a 18-5 Miner advantage in second-chance points.

Brenda Fontana led the charge on the glass with a career-high 10 rebounds while Cabral added seven (career best).

It was a wild back-and-forth game that featured big scoring runs by both sides, seven ties and nine lead changes, but the Orange and Blue remained steady throughout. That steadfastness helped the Miners march to 5-0 on the season, extending their best start since peeling off eight in a row in 2015-16. That team went on to win the 2016 Conference USA regular-season championship and qualify for the Postseason WNIT.

Thurman had the hot hand early, connecting on four shots to help fuel a 9-0 UTEP run after Seattle U scored first. The Red Hawks, who had been harassed into eight turnovers to that point, ran off seven straight points to pull even at seven. It was back-and-forth the remainder of the quarter, with the two sides deadlocked at 13 through 10 minutes of action.

Seattle U relied on an 8-3 run to go out by five (21-16) with 6:44 to play in the second quarter before a driving lay-up from Katia Gallegos and a pull-up jumper from Erin Wilson cut the deficit down to one (21-20) in a 90-second span. Neither team could string together anything special the rest of the period, as the Red Hawks held a small advantage (28-26) heading into halftime.

The Red Hawks got the first points of the second half before a 5-0 spark by UTEP pushed it out ahead at 31-30. It marked the Miners’ initial lead since the opening quarter. The two sides traded baskets the rest of the frame, allowing Seattle U to maintain its two-point advantage going into the final quarter

The Orange and Blue ripped off a 9-0 run to open the fourth frame, allowing them to be up by seven (53-46) three minutes into the period. Seattle U got off the mat to peel off six straight points to make it a 53-52 contest. The Red Hawks then misfired on two free throws, setting the stage for Grace Alvarez. She buried a long triple to put the Miners up four (56-52) with under three minutes to play.

Baker’s charges never trailed the rest of the way, with some big makes at the free throw line and a huge and-one basket and free throw by Battle salting away the contest.

UTEP will play for the second time in as many days when it wraps up the South Point Shootout against Big 12 foe Kansas on Saturday (Nov. 27) at 7 p.m. MT (6 PT).

Fans can tune into “The Home of UTEP Basketball” 600 ESPN El Paso or the UTEP Miners App to hear Mando Medina call the action.