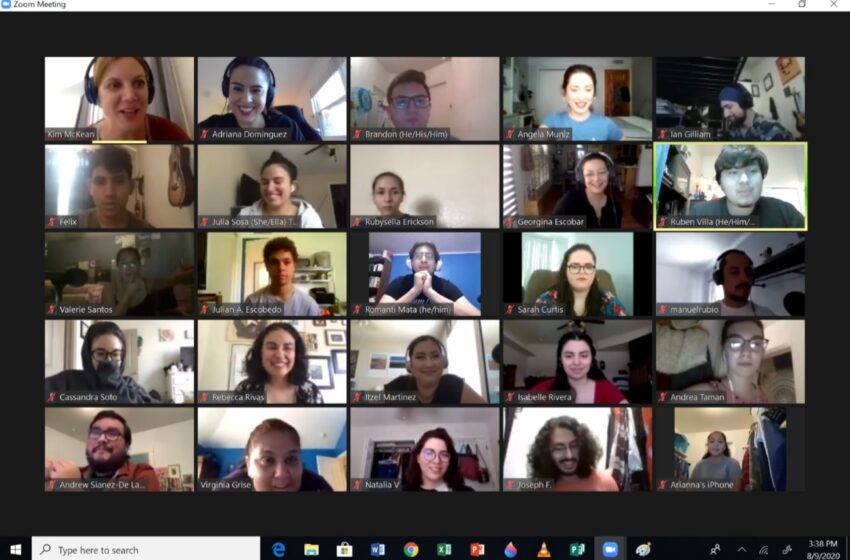 Theater administrators and faculty members at The University of Texas at El Paso have announced artistic alternatives for the live performances that were canceled last spring due to the COVID-19 pandemic.

The fall schedule is an example of how theater has been reimagined around the world, said Rafael “Rafa” Pérez, lecturer and director of audience development with the Department of Theatre and Dance.

“We are learning from each other and adapting to a world where social gatherings are not possible,” Pérez said. “I think it is important for our audience to not only be aware of that, but make UTEP a part of the conversation when it comes to reimagining and innovation in theater.”

Starting in September, students will participate in virtual performances scheduled by the Department of Theatre and Dance as well as the UTEP Dinner Theatre throughout the fall 2020 semester. Patrons may enjoy the events via the internet or, with a nod to the past, their radio.

The first scheduled event is “Borderline,” one of four original plays that make up “ReUnión rEvolución.” The performances will be broadcast at 11:30 a.m. every Saturday in September on KTEP-FM (88.5) as part of the station’s “State of the Arts” show.

Among the solutions was to revive radio plays, which originated in the 1920s and were a popular entertainment genre by the 1940s. Another was to use today’s Zoom teleconferencing technology. The plan to revive scheduled performances generated interest and participation from faculty and students with backgrounds in sound, video, design and streaming technology, as well as performance.

Kim McKean, assistant professor of theatre, is the founder and artistic director of “ReUnión,” which originally was a three-day event scheduled last March to celebrate local and national Latinx voices and stories. Organizers planned to include workshops, panel discussions and staged readings of new plays.

After the original event was canceled, McKean developed her plan for radio dramas. She contacted KTEP and developed a partnership with the station and the “State of the Arts” program to broadcast the productions in September as part of Hispanic Heritage Month.

Those who tune in to “State of the Arts” will hear the play and an interview with the playwright by the show’s host, Marina Monsisvais. Each production has a distinct theme: ghosts, religious satire, folk tale and a monologue told in two voices. McKean shared her pride in the numerous faculty members, professional playwrights and 20-plus students who helped with the audio plays.

Pérez, the audience development director, said the department has arranged additional online content throughout the semester to include student capstone projects. Some performances will be pre-recorded, some will include elements of dance, and some will have opportunities for post-event discussions.

Among the season’s other highlights will be a digital presentation of “Into the Beautiful North,” directed by award-winning guest director Melissa Crespo, starting at 6 p.m. Oct. 2. This show, which will be presented in pieces and viewed online throughout the month, is funded by a National Endowment for the Arts “Big Read” grant. It will be accentuated by additional community-centered online content in October. The play is an adaptation of the 2009 book by Luis Alberto Urrea, who will talk about the book virtually on Oct. 25, and participate in a question-and-answer session as part of the production.

The department also will present an untraditional production of “A Christmas Carol.” Faculty members are rewriting “A Christmas Carol: En La Frontera,” which the University has produced since 2018, into a radio play that will be produced and broadcast in partnership with KTEP. Greg Thompson, department lecturer and veteran entertainer, will direct.

Productions that involve KTEP will require actors to record their parts individually. Many will use portable Zoom digital recording devices that the theater and dance department recently purchased. The various elements, to include sound effects, will be edited together.

Among the students involved was Ian Gilliam, a senior theater arts major with a concentration in sound design. He helped with the “ReUnión” sound design and will work in the same capacity with “Into the Beautiful North.” He will be a co-sound designer on “A Christmas Carol.”

“This semester has already presented new challenges, but I have learned a lot from the radio show productions on how this can be done remotely and professionally,” said Gilliam, who described how the actors would perform together over a Zoom call. “I haven’t had a chance to design a project that so completely relies on sound design. It was a great opportunity to experiment and develop my editing and recording skills.”

Isabelle Rivera, a senior in pursuit of her Bachelor of Fine Arts in musical theatre, played a role in one of the “ReUnión” radio dramas and is among the singers who will perform in the upcoming UTEP Dinner Theatre’s “Broadway in Concert – Streaming Live” show. The El Paso native said she has used her body in the past to develop a character, but the radio drama allowed her to create a character simply with her voice.

“I got to try voice acting, which is something I have always wanted to do,” said Rivera, who played Veronica, one of the protagonists in “Borderline.”

The UTEP Dinner Theatre (UDT) will commence its 2020-21 season with “Broadway in Concert – Streaming Live,” at 7:30 p.m. Nov. 14, 2020, over the UDT’s Facebook and YouTube platforms. The performances by UTEP musical theatre majors and several of the UDT’s regulars will be done live on the dinner theater’s stage and will follow social distancing guidelines.

Beverly Kerbs-Ward, UDT associate director, said the producers continue to develop the show’s musical numbers and are confident that the selections will “shine.”

Click here for more information about the UDT, and here for the most updated performance schedule for events from the Department of Theatre and Dance.

Midfielders Yuma, Nick Ross back aboard Locomotive for...

Midfielders Yuma, Nick Ross back aboard Locomotive for...