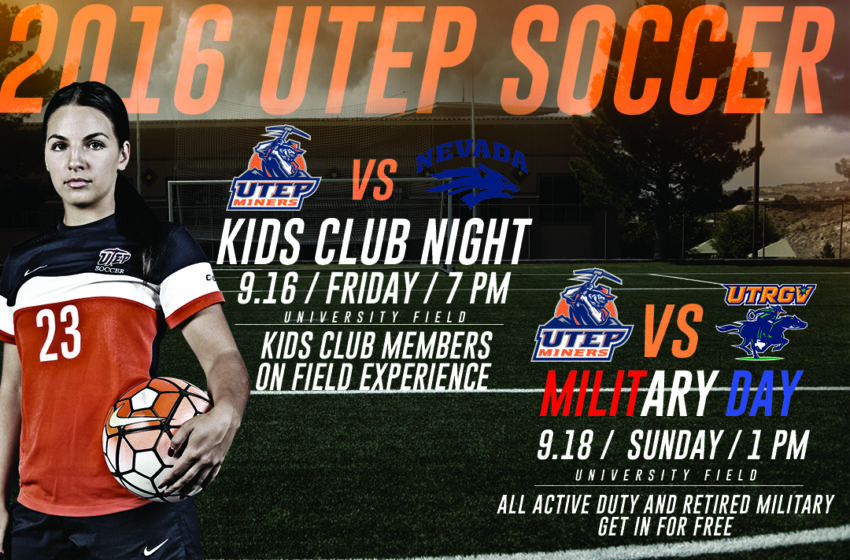 The UTEP soccer team will wrap up the non-conference portion of its schedule by playing host to Nevada at 7 p.m. MDT Friday and the University of Texas Rio Grande Valley (UTRGV) at 1 p.m. MDT Sunday.

“We are very excited for this weekend’s matches and would like our awesome fans to come out and support UTEP Soccer,” UTEP head coach Kevin Cross said. “We have the opportunity to host our old WAC foe, Nevada, for the first time since they moved to the Mountain West, and UTEP became a Conference USA member.

Nevada has a great team that is tough to score on, and has an exceptional keeper. We follow that game up by playing UTRGV, a current WAC-member school that has one of the best records in Division I soccer right now with a 5-1-1 mark. UTEP Soccer will be very much tested this weekend. We know that this is our last tune-up weekend before we start Conference USA play, and we expect to play our best soccer of the season. We appreciate our fan’s support.”

UTEP heads into the weekend 5-1-2 on the year, ensuring the 15th straight winning record in non-conference play. The Miners are 106-29-9 before league action since the start of the 2002 season, which was head coach Kevin Cross’s second year in that position.

UTEP, which set a program record by drawing 1,724 fans in its season opener against New Mexico State (8/19), is averaging a Conference-USA best 818 fans through three games. Middle Tennessee (666) and Charlotte (532) are the only other programs in the league to have an average of at least 500 fans in 2016.

For the second straight week, UTEP is ranked ninth in the NSCAA Central Region Poll. The Miners and North Texas (#6) are the lone squads from C-USA to crack the central-region Top-10 poll with the other eight spots coming from the Big 12 Conference. UTEP is no stranger to the attention, having now been regionally ranked for part of the season in 11 of the past 13 seasons.

Nevada is 2-3-0 on the year, with an even goal differential (4-4). The Wolf Pack allowed three goals total in their first two games (0-2 record) but have conceded just one goal in their three contests (2-1-0 record) since. Angel Meriweather has scored two of Nevada’s four goals on the year.

Morgan Beve and Rylee Peterson have also found the back of the net. The Wolf Pack returned nine starters and 15 letter winners from last year’s team (6-11-2, 3-7-1 Mountain West).

UTEP is 5-0-1 all-time against Nevada, with the majority of those match-ups occurring when both programs were members of the Western Athletic Conference. Last year the Miners picked up a 1-0 overtime road win (9/13/15). Friday’s match will fourth visit to El Paso, but first since 2004.

The Vaqueros allowed four goals in the first two games (1-1 record) but has set a school record with five straight shutouts since. Andreya Barrera (four goals) and Diandra Aliagra (three goals) have provided seven of UTRGV’s 12 goals. Barrera also paces the team in assists. UTRGV returned 10 starters and 20 letter winners from the 2015 squad.

Sunday’s match-up is the first meeting between the programs.

UTEP has recorded shutouts in six of the first eight games on the year, which already ties for 10th on the Miner single-season charts. Grand Canyon University (W, 3-2, Aug. 28) and Stephen F. Austin (L, 0-2, Sept. 11), are the only opponents to find the back of the net against the Miners in 2016. Of the four total goals, one came on a penalty kick and another occurred off a rebound of a penalty kick save.

The Miners are 17-8-5 on the road since 2013, including a mark of 1-1-2 this year. UTEP, which has strung together a school-record three straight seasons with winning road records, will have a chance to improve on those marks with three straight league road games to christen Conference USA play.

UTEP has tallied 12 of its 13 goals on the year in the second half. The Miners scored once in the first 45 minutes vs. NM State (W, 5-0, Aug. 19) in the season opener but every goal since that point has been during the second half. For what it’s worth, opponents have two goals in the opening frame and a pair after the break.

Seniors Bri Thomas and Aleah Davis have keyed the offense by combining for eight of the team’s 13 goals thus far in 2016. Thomas has five goals (tied second C-USA/40th nation) while Davis has put away three chances, including three match winners (first C-USA/sixth nation).

UTEP has been credited with 15 assists (tied third C-USA/36th nation) on its 13 total goals (seventh C-USA/80th) nation this year. Nine different Miners have recorded at least one helper on the season.

Going Back In Time

UTEP secured the program’s third-longest undefeated streak to start a season (seven games; 5-0-2) with a 2-0 win at Incarnate Word on Sept. 9. Bri Thomas (57’) and Aylin Villalobos (86’) scored while Nicole Lindsay (Thomas) and Aleah Davis and Kennadie Chaudhary (Villalobos) were credited with assists.

Looking Ahead To Next Weekend

The Miners will be idle on Sept. 23 before kicking off their 10-game Conference USA slate by playing at UAB (12 p.m. MT, Sept. 25). The contest will be the first of three straight away from home to christen league play, something UTEP hasn’t done since 2012 (four in a row).