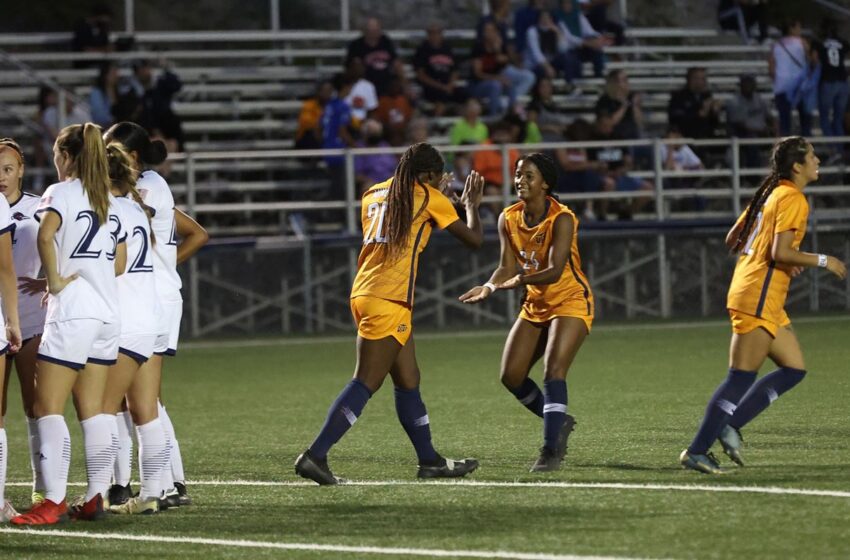 “We are looking to continue our success from last weekend,” UTEP head coach Kathryn Balogun said. “We spent the week working on key moments throughout our game. Our conference is tough and road games are even more of a challenge, but we are ready for a good game at LA Tech.”

The match will be streamed on C-USA TV and live stats will also be available.

Freshman GK Luisa Palmen delivered a career-high 10 saves (eight in the second half) to record her first career shutout in the 1-0 win against UTSA on Sept. 24. She was instrumental in delivering UTEP’s second clean sheet of the season, particularly with her eight stops over the final 45 minutes of action.

Palmen Piling Up The Saves

True freshman Luisa Palmen came through with a career-best 10 saves in the 1-0 triumph vs. UTSA on Sept. 24. It marked her fourth contest of the campaign with at least five stops. Overall, she has produced a team-leading 37 saves. That currently ranks 10th by a Miner freshmen GK on UTEP’s single-season charts by class.

Cabello In The Clutch

Defender Vanessa Cabello made a huge play early in the second half in UTEP’s 1-0 victory against UTSA on Sept. 24. After a diving stop by Luisa Palmen, the rebound bounced out to Roadrunner forward Abby Cassal. She was poised to bury the loose change, but Cabello perfectly positioned herself to clear it off the line for the team save to preserve the Miners’ lead. Palmen recorded seven more saves down the stretch, most of them routine, thanks to the efforts of Cabello and company as UTEP registered the win.

UTEP is aiming at consecutive wins for the first time this campaign. A victory would also get the Miners back to even in conference play after dropping their first two league matches to nationally-ranked Rice and (RV) North Texas.

With the big three points from the win against UTSA on Sept. 24, the Miners vaulted up to a tie for fourth place in the C-USA West Division. Five conference contests remain, with UTEP vying for a top-five division finish to punch its ticket to the C-USA Championships for the second time in three seasons under head coach Kathryn Balogun.

UTEP has piled up 13 assists on its nine goals on the year, including a season-high four helpers in the 2-1 overtime victory against NM State on Sept. 9. It is indicative of the possession-based style of play that the Miners have deployed on the campaign, with goals coming from a quality string of passes.

Bohdan, Fisher and Molly Sutherland share the team lead with two assists, while seven others have one helper. Bohdan paces the Orange and Blue for shots (15), while she shares the top spot for shots on goal (six) with Ngongo.

Twenty six different Miners have earned playing time this season, with 15 of them appearing in all 10 matches. There have also been 17 Miners to secure at least one start, with 10 starting at least seven contests.

LA Tech compiled a 4-3-1 record in nonconference action before dropping its first three league contests to slip to 4-6-1 overall, including 0-3 in C-USA play, heading into Friday’s match against the Miners. It has outscored opponents, 23-13, aided by a 76-67 margin in shots on goal.

Lauren Egbuloniu, Anna Loftus and Morgan Miller lead the charge with three goals each. Three other players have two tallies. Loftus has been the most assertive, with a team-leading 14 shots on goal. Libe Banuelos has earned the bulk of the playing time at GK, making 43 saves to go along with two shutouts.

UTEP is 2-3-1 against LA Tech since the Lady Techsters joined Conference USA in 2013. The Miners have won back-to-back games in the series, including a 2-1 overtime triumph on Feb. 28, 2021, during the Covid-affected 2020 season.

Living On The Road

UTEP returned 23 letter winners from last year’s team (3-6-2, 2-3-1 C-USA), including nine starters. The Miners also added six newcomers. The Orange and Blue are under the direction of third-year head coach Kathryn Balogun, who sports a mark of 16-20-5 in the Sun City, including 3-7 this year.